Corona on May 29, 2012 was found guilty by the Senate acting as an impeachment court. 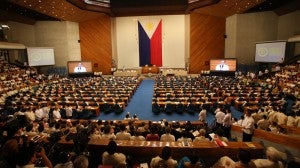 According to COA’s annual audit report on the National Dairy Authority (NDA) as of December 31, 2013, at least 46 former and incumbent lawmakers were allocated with P229.6 million for milk feeding programs.

The report said the Department of Budget and Management (DBM) issued special allotment release orders (Saro) and notice of cash allocations (NCA) for 46 solons on Dec. 22, 2011, or 10 days after the House of Representatives impeached Corona.

These lawmakers were endorsed by Speaker Feliciano Belmonte Jr. to the DBM for fund allocation, the report read.

DAP became controversial after Senator Jose “Jinggoy” Estrada, who is detained for plunder over the pork barrel scam, claimed that funds from DAP were given as incentives to senators who voted to convict Corona.

Some practices under DAP were declared unconstitutional by the Supreme Court at the height of the controversy, pitting the judiciary against the executive. President Aquino had warned the high court of colliding with the executive.

In their report, COA said the DAP funds for the milk feeding program “may not have fully contributed in the attainment of the DAP objective of accelerating government spending…”

COA recommended that the NDA management “return the unutilized DAP funds to the Bureau of Treasury pursuant to the pronouncement of the Supreme Court that the DAP is unconstitutional.”

In a statement, Tinio said they didn’t know that the funds for the milk feeding program were sourced from DAP. He said they thought these were from NDA’s regular appropriations.

“We were also dismayed to learn, only recently, in the light of the controversy over President Aquino’s DAP, that funding for the NDA’s Milk Feeding Program, including the two projects we identified, was sourced through the DAP, which we have consistently opposed. At the time, we assumed that the program was a regular program of the NDA, with funding from its regular appropriations,” Tinio said.

The former and incumbent lawmakers who were tagged as the proponents of the milk feeding program are: