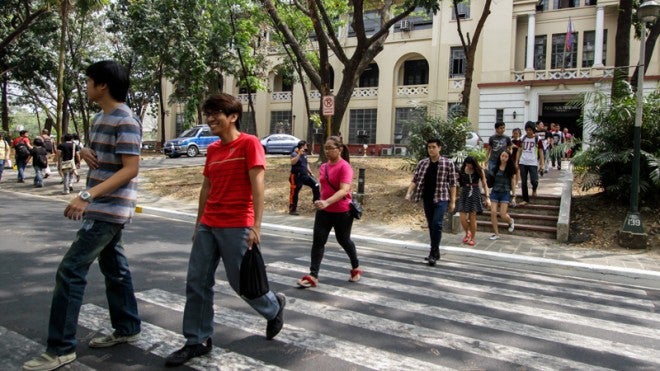 Authors are not persuaded by the rationale in removing the Filipino courses in college, and they join the call for its immediate reinstatement in the general curriculum. INQUIRER PHOTO / LEO M. SABANGAN II

MANILA, Philippines–Requiring Filipino as a subject and as a language of instruction in college will be good for Philippine education. For this to happen, the reasons given by the pro-Filipino side in this controversy will have to be robust and compelling.

Proponents for Filipino as a language of instruction anchor their stand on two arguments. The first is a familiar one: Filipino has been recognized under the 1987 Constitution as the national and official language for education and communication.

The second argument is that teaching Filipino and using it as a language of instruction, especially in higher education, will contribute to its intellectualization.

But here comes the rub. The constitutional provision on Filipino as medium of official communication and instruction is not without conditions. These conditions are contained in the following sections of the nation’s Charter:

(1) “Subject to provisions of law and as the Congress may deem appropriate, the government shall take steps to initiate and sustain the use of Filipino as a medium of official communication and as language of instruction in the educational system.”

(2) “For purposes of communication and instruction, the official languages of the Philippines are Filipino and, until otherwise provided by law, English.”

(3) “The regional languages are the auxiliary official languages in the regions and shall serve as auxiliary media of instruction therein.”

Clearly, Filipino is only one of the country’s official languages. At the grassroots, the local language joins Filipino and English as an official medium in governance and in education.

In fact, Congress recently passed three laws that redivided the instructional space among the learner’s first language (L1), English and Filipino. Enacted in 2012 was the Kindergarten Education Act followed in 2013 by the Early Years Act and the Enhanced Basic Education Act.

Now enshrined in law is the country’s language-in-education policy:  L1-based multilingual education. Students at the elementary grades will be taught in their first language, but will take up Filipino and English as second language (L2) subjects.

The Department of Education will determine when the shift from L1 to L2 as primary and auxiliary language of instruction should be made, provided the shift is gradual and not abrupt.

To us, the key criterion is the student’s competence to receive academic instruction in their L2s alongside their L1.

The ability to transfer L1 concepts to the L2s and vice-versa ensures that the L2s add to the learner’s L1 competence and do not replace nor subtract it.

That said, a language policy for college education must adhere to the same principle of additive education. Instruction should be delivered in a language or languages understood by the learners.

The pervasive socio-linguistic diversity throughout the country is another factor to consider in choosing the appropriate language of instruction.

There is absolutely nothing wrong with using L1 or Filipino for some subjects, English for others, and even mixed varieties for the remainder, provided real learning is taking place and the course objectives are being met.

But since there is no law or legislation on the language of instruction at the college level, it is best to leave this issue for individual institutions of higher learning to decide.

The intellectualization of the national language is a noble objective, but one that is clearly secondary to effective student learning.

Besides, the new language-in-education policy already provides us with enough space to develop this predominantly oral language into an academic producer and carrier of knowledge in the higher domains of learning.

The teaching of Filipino subjects in college is a different matter.  Before, there were nine units of Filipino that formed part of general education until technical experts banished them to Grades 11 and 12.

This runs counter to the very idea behind adding two years to basic education, namely “to decongest the curriculum.”

A study in 2011 compared the educational systems in Malaysia, Singapore, Brunei and the Philippines. Curricular time per subject was found to be longest in the country with the shortest cycle—the Philippines.

If our students were cramming in 10 years what students in other countries were learning in 12 years, why congest the program even more?

In the first place, expanding basic education by two years is no guarantee to quality instruction. A literacy survey in 2008, for instance, reported that one out of every five elementary graduates was functionally illiterate.

A second study in 2010 by Dr. Abraham Felipe and Dr. Carolina Porio concluded that our short education cycle could not be blamed for the low science and math scores of Filipino students.

In sum, we are not persuaded by the rationale in removing the Filipino courses in college, and we join the call for its immediate reinstatement in the general curriculum.

In case these courses do not qualify under the new definition of general education, then the correct procedure is to revise the courses, and not to remove them.

Did you know: Commission on Filipino Language

Filipino: A ‘conspiracy’ of non-Tagalogs