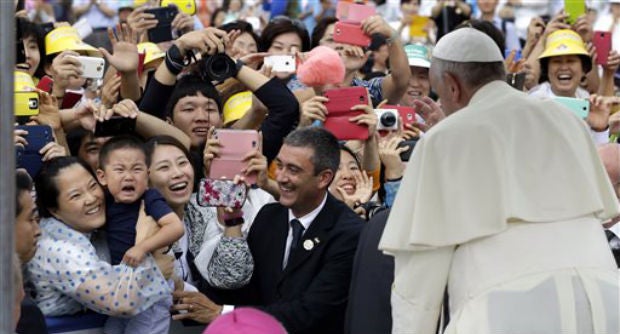 Pope Francis, right, blesses a crying child who does not want to separate from his mother, near a Vatican gendarmerie, center, upon the Pope’s arrival for the Closing Holy Mass of the 6th Asian Youth Day in Haemi Castle in Haemi, south of Seoul, South Korea, Sunday, Aug. 17, 2014. Pope Francis wraps up his five-day visit to South Korea on Monday with a Mass for peace and reconciliation. AP

SEOUL–Pope Francis wraps up his five-day visit to South Korea on Monday with a Mass for peace and reconciliation. Here are details on the day ahead.

—9 a.m. (0000 GMT): Francis meets with religious leaders at the Seoul archdiocese. The guest list includes Buddhists as well as other Christian communities, including the Anglican bishop in Seoul, the Orthodox archbishop, president of the Lutheran church and head of the Presbyterian church in Korea, according to Vatican spokesman the Rev. Federico Lombardi. No speeches are planned.

—9:45 a.m. (0045 GMT): Francis celebrates his concluding Mass for peace and reconciliation in the Myeong-dong Cathedral in Seoul. Lombardi has said the pope won’t make any overt political statements about peace with North Korea during his homily. Attending the Mass in the front row will be three women used as sexual slaves by the Japanese military during World War II. Lombardi has said Francis will greet them, but it’s unclear if he’ll meet privately with them.