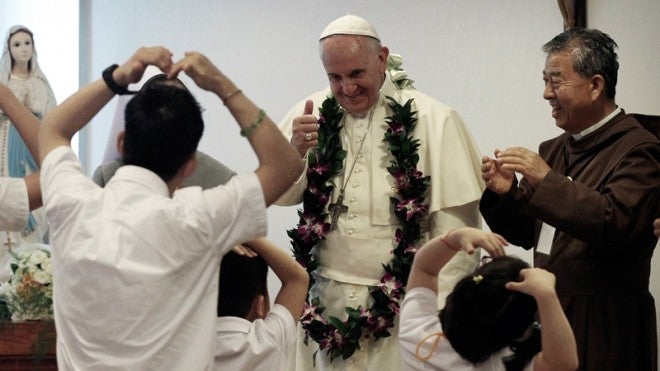 Pope Francis gives a thumbs-up as disabled children perform for him during his visit to the rehabilitation center for disabled people at Kkottongnae in Eumseong, South Korea, Saturday, Aug. 16, 2014. The Pope will lunch with the poor when he visits Tacloban City on Jan. 17, 2015. AP PHOTO/AHN YOUNG-JOON

CEBU CITY, Philippines—Bad news for politicians and rich people who hope to rub elbows with Pope Francis during his first visit to the Philippines in January.

The Holy Father has told Archbishop John Du of Palo that he wants to be with the poor and those afflicted by Super Typhoon “Yolanda” (international name: Haiyan).

Based on the Pope’s instruction, Francis intends to share a meal with the poor victims of last year’s calamities when he visits Tacloban City, Leyte, on Jan. 17.

“He will be sitting side by side with poor people. Simple food will be served and there will be no VIPs,” Du said in an interview on Saturday.

“If possible, the Pope wants to stay away from the big people, the VIPs,” he added.

Du appealed to the VIPs not to take center stage during the papal visit.

“Please give way to the poor for they are the main reason the Pope will come here,” he said.

Du will select 30 individuals who will dine with the Holy Father. The group, he said, will include five people from northern Cebu, five Boholanos while the rest are from Leyte.

Yolanda devastated the Visayan region on Nov. 8 last year, killing some 6,300 people with 1,060 still others missing. The typhoon damaged property and public structures worth more than P25 billion.

Tacloban was the hardest hit area. Bohol, on the other hand, was hit by a 7.2-magnitude earthquake on Oct. 15 last year, which killed at least 200 people.

“He was the only survivor and he will stay right beside the Pope so he will be reminded that he’s not alone, that the Pope may be able to comfort him,” Du said.

Under the present schedule, the Pope is not likely to drop by Cebu, which will celebrate the feast of the Sto. Niño on Jan. 18, Du said.

“Pope Francis was invited to come to Cebu but he said he’s not coming for a fiesta. He said he doesn’t intend to make any side trips because the only reason he will come to the country is to be with the poor, the victims of Yolanda,” the archbishop said.

Du said he wanted the Pope to visit the Queen City of the South but only Manila and Leyte are in the Pope’s itinerary for now.

“I love the Holy Father to come to Cebu, the cradle of Christianity in the Far East. The Sto. Niño is very significant to the whole Philippines. Sometimes, the Holy Father deviates from his schedule. Who knows? Maybe there will be changes in the schedule,” he said.

Du said the Archdiocese of Palo, which has ecclesiastical jurisdiction over the entire island of Leyte, was now busy preparing for the six-and-a-half-hour papal visit.

“He wants to give them comfort, mercy and compassion. The Pope would like these people to feel the mercy of God, that they are not alone, that they are not being left out or abandoned. Instead, they are loved and He’s one with them in their sufferings,” he said.

“The Pope said ‘Give me time to be with the poor.’ He’s telling the rich people that ‘if they want, they could assist me’ [in serving the poor]. The poor are close to the heart of the Holy Father and Jesus,” Du added.

Center for the Poor

During his visit to Leyte, the Pope will hold an open-air Mass at the Tacloban airport at 10 a.m. Then he will proceed to the archbishop’s residence to dine with the poor. Afterward, the Pontiff will bless the Pope Francis Center for the Poor—a project financed by the Vatican for the care of the elderly, the orphans and the less privileged.

After the blessing, Pope Francis will go to Palo Metropolitan Cathedral to address the clergy and the religious congregations.

He will also bless the newly refurbished Palo Metropolitan Cathedral of Our Lord’s Transfiguration, which was ruined by Yolanda.

The Pope will fly to Manila after the event at Palo Cathedral.

“Pope Francis’ visit to Palo will only be short because our airport is not capable of bringing him back to Manila in the evening,” Du said.

He said the local government of Leyte was now widening the roads where the Pope would pass. These roads stretch for 11 kilometers from the airport to Palo.

The local church, on the other hand, is preparing for an open air papal Mass at the Tacloban airport.

“There are no special preparations. Everything should be simple,” Du said.

A “Popemobile”—the Pope’s custom-built, bulletproof vehicle—will be provided by church counterparts in Manila.

“We’re actually 70 percent ready in terms of physical preparations, although Leyte is not yet totally rehabilitated,” Du said. “On the spiritual aspect, we’re preparing our people to develop the idea of mercy and compassion, which is the theme of Pope Francis’ papacy.”

The archbishop anticipates the possibility that Francis will go down from his Popemobile to interact with the poor.

“He’s even planning to visit those in the slum area and those who are homeless until now. His representatives told me that if the Holy Father will go down from the Popemobile, I simply have to accompany him,” Du said.

While many would want to see the Pope in person, Du said Leyte would want to minimize visitors from neighboring regions as much as possible.

“We actually don’t have enough accommodations or hotels where they could stay,” the archbishop said.–With a report from Inquirer Research

Tacloban getting ready for papal visit

Keep it simple, Church told, as plans for Pope visit get going