Tacloban getting ready for papal visit 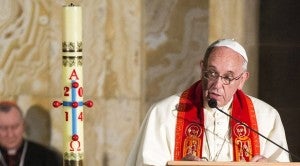 TACLOBAN CITY, Leyte —With five months to go before Pope Francis’ visit to Leyte, preparations for the widely anticipated event are now under way,  including the widening of roads where the Holy Father is expected to travel during his visit to a city devastated by super typhoon late last year.

This was revealed by Dionisio de Paz, chief of the Tacloban City Engineering Office, who said the road widening actually began three weeks ago.

The Rev. Amadeo Alvero, spokesperson of the Archdioceses of Palo under whose jurisdiction Tacloban falls, said special Masses for a “successful and meaningful” papal visit started being offered in all churches within the archdiocese since August 1.

Pope Francis, who is scheduled to visit the Philippines from January 15 to 19, has expressed a wish to meet with survivors of Super Typhoon “Yolanda,” the strongest typhoon to ever hit land, devastated Tacloban and much of Eastern Visayas on Nov. 8, 2013.

Some 6,300 people were killed and 1,060 more are listed missing, with Tacloban, the hardest hit area, accounting for almost a third of the fatalities and more than P25 billion in damage to property and public structures.

De Paz said that the roads that are being widened stretch 11 kilometers from the San Jose area, where the Daniel Z. Romualdez Airport is located, to the neighboring town of Palo, where the seat of the archdiocese, the Palo Cathedral, is located.

“This road widening is being done due to the visit of the Pope next year and we expect to finish the work by November,” De Paz said.

He could not say, however, how many houses or establishments would be affected by the road widening.

When completed, the roads being widened would have four lanes each, enough to accommodate the expected influx of visitors.

Alvero said that for security reasons, he could not disclose where the Pope will say Mass.

“The details of itinerary of activities of the Pope’s visit will be announced later for security reasons. What is certain is that Pope Francis will visit us, victims of the Super Typhoon “Yolanda.” And for this, we the faithful, are asked to prepare ourselves spiritually in prayer and in being merciful and compassionate to our brothers and sisters in need,” Alvero said.

He said that Archbishop John Du has asked all priests in the archdiocese to offer special Masses for the papal visit to be successful and meaningful. The Masses, which began on August 1, will continue right up to the Pope’ arrival.

“We are all excited for the visit of the Vicar of Christ. This will be a moment of joy and thanksgiving for us victims and survivors of Yolanda. The Pope’s visit will surely inspire us and give us hope,” Alvero said.

Pope Francis would become the first ever Pontiff to visit Eastern Visayas, home to 4 million Catholics.