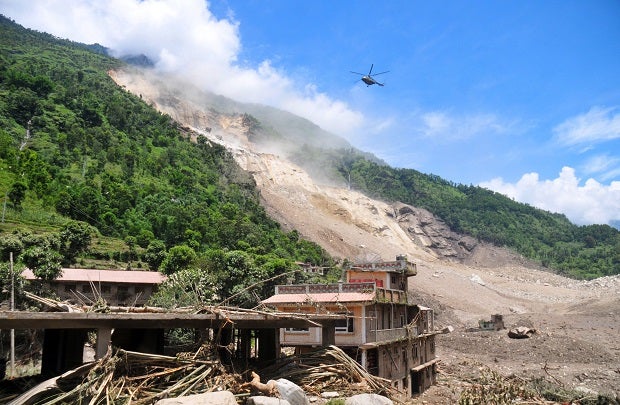 A Nepalese Army helicopter flies over the site of a landslide during a rescue operation in Sindhupalchowk area, about 120 kilometers (75 miles) east of Katmandu, Nepal, Saturday, Aug. 2, 2014. A massive landslide killed at least eight people and blocked a mountain river in northern Nepal on Saturday, causing the water to form a lake that was threatening to burst and sweep several villages, officials said. AP

KATHMANDU, Nepal–Rescuers Sunday found 12 more bodies buried under mud and debris to bring the death toll from landslides and flooding in Nepal to 97, sparking fears of a cholera outbreak.

Torrential rain last week triggered multiple landslides and flooding, stranding thousands of villagers and leaving a trail of death and destruction in the Himalayan nation.

The rains have damaged roads across the country’s western plains bordering India, forcing officials to use helicopters to rescue stranded people and deliver emergency supplies.

The new death toll was given by Jhankanath Dhakal, chief of Nepal’s National Emergency Operation Center.

In Bardiya, officials scrambled to provide clean drinking water kits to distraught villagers, as fears grew of a cholera outbreak from the submerged bodies of humans and livestock.

Cholera is a potentially deadly disease spread by eating or drinking food or water contaminated by human faeces.

“We are alert to the risks of water-borne diseases after flooding. A medical team is going from shelter to shelter… distributing water-purifying drops,” Achyut Lamichhane, Bardiya’s chief health official, told AFP by phone.

Local officials said the rains had devastated entire villages, destroying houses and drowning families along with their livestock.

“The place stank of decomposing cattle. All 30 houses have been destroyed, I could see shards of doors and windows… clothes and utensils,” said Bijay Gautam, a local official returning from a visit to Durwo village in Dang district.

A woman and her two daughters, who initially fled but later returned home to retrieve their valuables, were among the dead, Gautam said.

Villagers in Surkhet, the worst-affected district, described their horror at being awoken by news that the nearby Bheri river was overflowing early Friday.

“My neighbors woke me up. I gathered my family and we just ran uphill to save ourselves… I didn’t even have time to cut my cattle loose so they could flee,” farmer Prem Bahadur Pun told AFP by phone.

“By morning, our house was gone, the cattle was gone, my land was gone. I have lost everything.”

About 150 people from his village managed to escape, Pun said, but many others were not as lucky.

“So many people are missing… including one of my neighbors, his wife and two grandchildren,” he said.

As villagers waited for help, many were already suffering from fever though no symptoms of cholera had been observed yet, Pun said.

“No one (from the government) has come here yet,” Pun said. “Some people are getting sick… We have some medicine, but what will we do when it runs out?”

The deaths come two weeks after the worst landslide in over a decade smashed into hamlets in the hilly northeast and killed 156 people.

Heavy rain in neighboring India’s Uttarakhand state has claimed at least 24 lives since Friday, reviving memories of a deluge last year that killed more than 5,000 people in the same region.

Media reports Sunday said several districts in the northern Indian states of Bihar and Uttar Pradesh were also flooded after heavy rain near Himalayan rivers and the release of excess water from barrages in Nepal.

“Water has started to recede but problems persist on the Nepal side,” the Times of India quoted Deepak Singhal, a senior administrative officer in Uttar Pradesh, as saying.

Hundreds die every year in floods and landslides during the monsoon season in South Asia.–Paavan Mathema