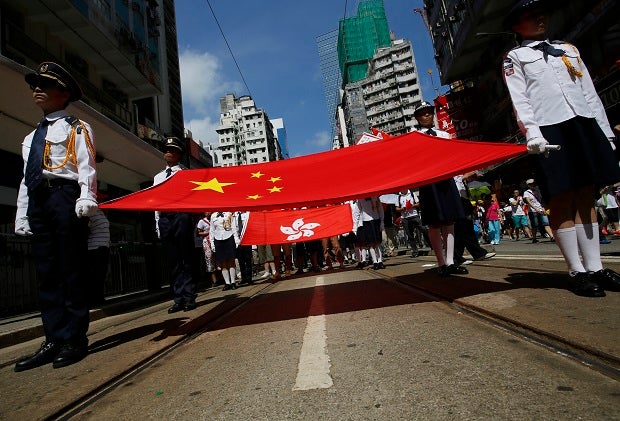 Participants hold a Chinese national flag and a Hong Kong flag as tens of thousands of people march on a down town street to oppose a planned civil disobedience campaign by pro-democracy activists in Hong Kong, Sunday, Aug. 17, 2014. The rally was organized by a pro-Beijing group. Many carried banners or shouted slogans saying they were opposed to the Occupy Central pro-democracy movement. AP

HONG KONG— Tens of thousands of people, many wearing red as a sign of their patriotism to China, took part in a demonstration march in Hong Kong on Sunday to protest a planned civil disobedience campaign by pro-democracy activists in the city.

Demonstrators braved wilting heat to participate in the rally, which was organized by a pro-Beijing group. Many carried banners or shouted slogans saying they wanted to “oppose” the Occupy Central with Love and Peace pro-democracy movement, while others waved Chinese flags. Some, however, seemed to be not quite certain what they were protesting.

Occupy Central’s organizers have sparked political turmoil in Hong Kong and unease in Beijing with their plan to rally at least 10,000 people to freeze the specially administered Chinese financial hub’s central business district if the government fails to come up with satisfactory democratic reforms.

After the former British colony came back under Chinese control in 1997, it was allowed to keep a high degree of autonomy over its own affairs and Western-style civil liberties unseen on the mainland, although an elite pro-Beijing committee picks the city’s leader. Beijing has promised that starting in 2017, Hong Kong voters can choose the leader, but insists candidates be vetted by the committee, which democracy activists reject.

“Occupy Central is an extreme way of protest,” said Terence Chung, a company manager who joined Sunday’s march. “Using legal ways to express opinions is all right. If it comes to an irrational protest, social order will be disrupted.”

The Alliance for Peace and Democracy held the rally to cap its monthlong anti-Occupy petition campaign. But tactics used to mobilize supporters raised questions about whether demonstrators knew why exactly they were marching.

Pro-establishment trade unions or professional groups, for example, urged members to join. People who recently moved to Hong Kong from mainland China were also offered cheap day tours of the city, with stops that included lunch, a museum visit and the anti-Occupy march, according to local news reports.

“I don’t understand what Occupy Central is for,” said a 54-year-old construction worker, who gave only his surname, Siu, and turned out with his daughter. When asked why he joined the rally, he would only say that it was because he had some free time.

In Chinese shadow, Hong Kong fights for its future