In Chinese shadow, Hong Kong fights for its future 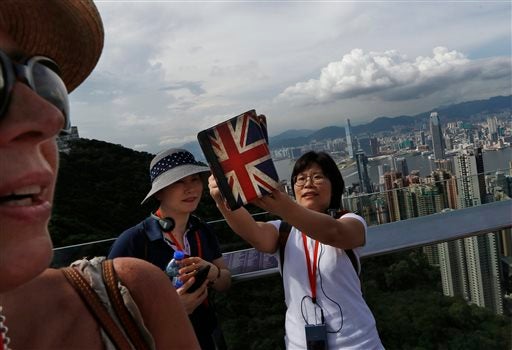 In this July 10, 2014 photo, tourists use a smart device to take photograph of themselves with the general view of Hong Kong at The Peak. AP FILE PHOTO

HONG KONG — As skyscrapers around Hong Kong harbor erupted into a reverie of laser beams and giant digital displays during their synchronized nightly light show, one innocuous 28-story building near the water’s edge had stayed dark for months, clad in bamboo scaffolding for a face-lift.

Then, in June, the renovated tower came to life, flashing giant Chinese characters that some in Hong Kong saw as a warning.

Many in this prosperous city had already feared that Hong Kong’s future as an open society as well as a semiautonomous part of China was in jeopardy in the face of perceived growing intervention from Beijing. Tens of thousands of people had turned out days earlier for an annual vigil to commemorate victims of the 1989 Tiananmen Square massacre, while an unprecedented policy “white paper” declaring Beijing’s irrevocable control over the territory had generated furious debate about Hong Kong’s future.

Now, after the Chinese military building had kept a low profile for years, its brief debut in the city’s beloved “Symphony of Lights” felt like nothing less than a show of force 17 years after the British handed the territory back to Chinese control.

“If Hong Kong people don’t obey the Communist Party,” Chiu predicted, “the army will come and fight us.”

From the sweltering streets of this legendary port city of 7.2 million people to its air-conditioned office towers, Hong Kongers are indeed picking sides in a looming battle over their city.

People here have long prided themselves as providing a stable, sophisticated alternative to Communist China that despite its small population enjoys the world’s 36th-biggest economy and runs the globe’s sixth-richest stock exchange.

But now, Hong Kongers say the soul of their society is coming under attack as they see the flood of cross-border Chinese shoppers (dubbed “locusts” for their voracious buying habits and supposed bad manners) and grow wary of the Communist Party’s rising sway with top officials.

One significant fear is that Beijing is breaking promises to let voters elect their leaders for the first time starting in 2017. Chief Executive Leung Chun-ying, who was hand-picked by a committee of mostly pro-Beijing elites, recently asked China’s legislature for constitutional changes to allow the territory to pick its own leader. However, his report said “mainstream opinion” wanted the committee to again pick candidates, setting the stage for a confrontation with democracy groups.

Already, the pro-Beijing influence is threatening a disciplined civil service corps traditionally untainted by political corruption, says Anson Chan, a democracy activist who was Hong Kong’s chief secretary and No. 2 official from 1993 to 2001.

“If the government gives the community the impression that it doesn’t listen,” she says, “then the community feels that the only way of making this government listen is to take to the streets.”

In the eyes of Chan and others, Beijing’s influence has also hit the city’s media industry. Most newspapers no longer run stories critical of the Chinese government, and in February an outspoken former editor at the Ming Pao newspaper was attacked by cleaver-wielding men.

Hong Kong’s journalists’ association called the past 12 months “the darkest for press freedom for several decades,” citing the attack and advertising boycotts. Last year, the French press watchdog group Reporters Without Borders ranked Hong Kong 61st in press freedom, down from No. 18 in 2002.

The most troubling blow came last month with the white paper, which argued that Hong Kong’s high degree of autonomy, famously dubbed “one country, two systems,” was entirely at Beijing’s discretion. It added that “loving the country is the basic political requirement for Hong Kong’s administrators,” including its judges.

Even Hong Kong’s lawyers, a reserved group who dress for court in wigs and black robes, hit the streets by the hundreds to protest the white paper.

“We are definitely at a crossroads,” Chan says. “Hong Kong people are growing increasingly angry and frustrated, and I think something has to give.”

But not everyone agrees.

“I think Beijing is doing a good job in China. And the Communist government in Beijing is doing all the right things about Hong Kong that it’s supposed to be doing,” said Robert Chow, spokesman for the group Silent Majority, which opposes a plan by pro-democracy protesters to paralyze the city’s financial center.

“Hong Kong is the proverbial rabbit who thinks he’s going to beat the tortoise forever, but they forget that’s not the tortoise. It’s a super tortoise that runs fast or faster,” he said.

Hong Kong Justice Secretary Rimsky Yuen Kwok-keung said that Beijing wouldn’t require judges to make any “political or other inappropriate” considerations while deciding cases. Pro-government Hong Kong legislators also say critics are overdramatizing the Chinese threat. Instead, they warn that protesters who plan to shut down the city center are the real danger.

In one sign of Beijing’s sensitivities, the People’s Liberation Army stopped flashing its name across its building after the test run in June unleashed online outcry.

“Democrats should not use fighting means to achieve their own purposes,” says Christopher Cheung Wah-fung, a legislator and businessman who runs a stock brokerage firm.

“Keeping the dialogue,” he says, “is better than confrontation.”

Some, however, are already looking to use foreign passports and move away, evoking the scene before the 1997 handover when hundreds of thousands left in fear of Chinese rule.

“‘One country, two systems’ is collapsing,” says Ray Kwan, a 23-year old engineering graduate from Hong Kong University who wants to emigrate to the United States. “You have to compete with 1.3 billion people, with all of China. So my way of helping myself is just to leave.”

Yet amid the despair, thousands of people are taking action. As many as 800,000 Hong Kongers voted in an activist-sponsored online referendum last month on electoral reform, which Beijing called illegal. Massive protests filled the city days later in the biggest march in years held on the anniversary of the city’s return to Chinese rule.

“I think I will stay in Hong Kong until the last minute,” said Joshua Wong, a 17-year-old who has opposed attempts to introduce pro-Beijing education in schools. “But if we stay silent, the situation will only get worse.”

On the street, Hong Kongers notice the everyday signs of China’s expanding influence.

Housewife Chan Man-yin, who lives in the city’s northern suburbs, said she’s had a hard time finding milk power because mainlanders from across the border buy up all the stock, fearful of tainted formula in China.

Chan admitted that like many of her neighbors, she’s watched Hong Kong change in ways she fears are irreversible.

“We’re all scared,” she said. “I’d be lying if I said I wasn’t. I’m afraid for my free speech rights. My personal rights are very important to me.”

For Roger Chen, who moved from the mainland a year ago for a job at a hedge fund, Hong Kongers are only feeling insecure in the face of China’s booming economy, which has eclipsed the territory’s importance as a commercial gateway to the mainland.

“Beijing has no intention to break their deal,” Chen said at a Starbucks cafe as his pregnant wife nodded. “Hong Kong is more like a child of Beijing. It’s a very cherished child of China.”