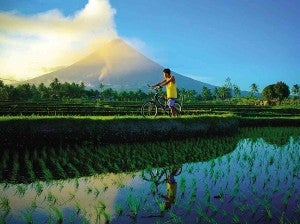 A boy pushes his bike along a rice field while admiring the enchanting Mayon Volcano on his way home to Barangay Lidong, Sto. Domingo town, Albay province. Albay authorities are considering banning mountain climbers from the area after volcanologists raised the state of alert around the volcano from normal to level 1. With Albay under “Gorio” storm signal No. 2 on Sunday, Phivolcs has issued a lahar-slide warning. AL BENAVENTE/CONTRIBUTOR FILE PHOTO

LEGAZPI CITY, Philippines—The alert level over Mayon Volcano has been raised to 2 from 1, the Philippine Institute of Volcanology and Seismology said Friday.

Volcanologist Alex Baloloy, who is based in Lignon Hill Observatory here, confirmed, in a text message, that the alert level has been raised to 2 as of 1 p.m.

Alert level 2 means the volcano is in a state of “moderate unrest” compared to alert level 1 which means a state of “abnormal condition.”

The new alert level has yet to be posted on Phivolcs’ website but its 8 a.m. bulletin when the volcano was still at alert level 1 showed no crater glow was observed over the volcano last night.

Sulfur dioxide (SO2) flux was measured at an average of 850 tons per day on Monday.