8 things to know about the deadly Ebola virus | Inquirer News

8 things to know about the deadly Ebola virus 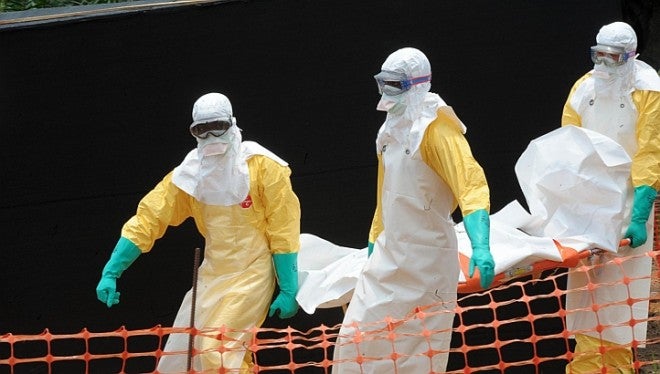 Staff of Doctors Without Borders (Médecins Sans Frontières) medical aid organization carry the body of a person who has died from a viral hemorrhagic fever at a center for victims of the Ebola virus in Guekedou in Guinea, West Africa, on April 1. AFP

European and Asian countries went on alert on August 13  amid growing fears that the Ebola outbreak in West Africa could spread to other continents with a stark warning by the medical charity Doctors Without Borders that the epidemic was out of control.

The outbreak has already claimed more than a thousand lives, making it the worst ever on record.

Guinea, Liberia and Sierra Leone have borne the brunt of the recent epidemic. Nigeria, Africa’s most populous country, recorded its first death on July 25.

Here’s what you should know about Ebola, one of several viruses responsible for hemorrhagic fever.

1. The World Health Organization (WHO) calls it “one of the most virulent diseases known to humankind”.

2. It can kill up to 90 per cent of the people who are infected.

Five “species” of Ebola have been identified so far, and have been named Bundibugyo, Sudan, Zaire, Tai Forest and Reston. The first three are particularly dangerous, with fatality rates of up to 90 per cent.

The Zaire is the one at the heart of the current epidemic. The Reston species has also been identified in China and the Philippines, but no associated deaths have been reported in those countries to date.

3. The virus first appeared in 1976 in Nzara, Sudan and in Yambuku, Democratic Republic of the Congo.

It took its name from the Ebola River, which was near the village in Yambuku where the outbreak occurred.

4. Ebola can be caught from both humans and animals.

It is transmitted through close contact with blood, secretions or other bodily fluids. Fruit bats are considered to be the natural host of the Ebola virus.

5. It spreads quickly through human-to-human transmission, as family and friends care for infected people.

Healthcare workers have frequently been infected while treating Ebola patients.

The virus has also been known to spread at burials where mourners touch the body.

6. Symptoms can appear from two to 21 days after exposure.

Early symptoms such as rashes and red eyes are common, making it hard to diagnose in the early stages.

7. The virus spreads in the blood and paralyses the immune system.

This is followed by vomiting, diarrhoea, rash, impaired kidney and liver function, and in some cases, both internal and external bleeding such as from the nose or via a person’s urine.

8. There are some experimental Ebola therapies 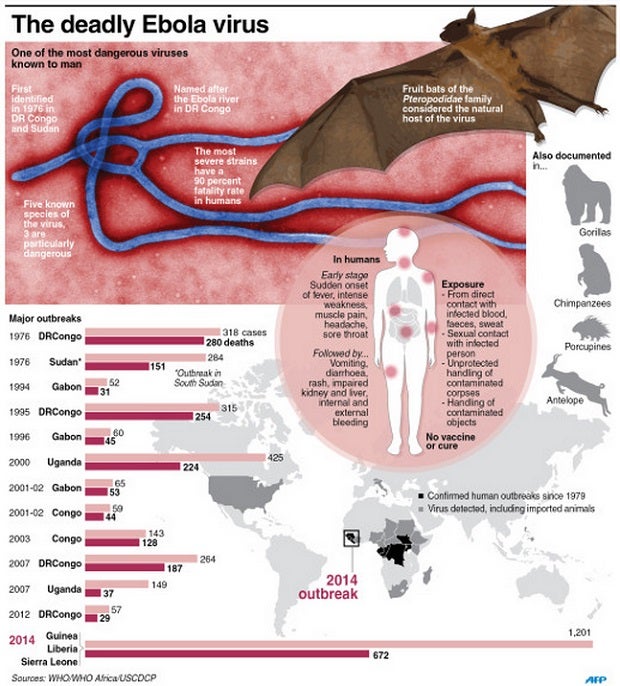 One, produced by tiny California biotech Mapp Biopharmaceutical, gained international prominence recently when it was given to two US aid workers who contracted Ebola in West Africa and have since shown signs of improvement. The three most hard-hit nations in West Africa are awaiting a consignment of up to 1,000 doses of the barely-tested drug ZMapp.

Other promising drugs are from Vancouver-based Tekmira Pharmaceuticals and privately-held Profectus BioSciences, of Tarrytown, New York.

Canada has said it  is providing between 800 to 1,000 doses of a vaccine called VSV-EBOV, which has shown promise in animal research but never been tested on humans, to be distributed through the World Health Organization (WHO) which has declared the current outbreak to be an international health emergency.

WHO has said that experimental treatments could be made available to people infected with the disease.

No Ebola drugs or vaccines have even entered mid-stage human trials, let alone been approved. The furthest along have been tested only in monkeys and a handful of humans.

Mapp Biopharmaceutical began developing its ZMapp treatment more than a decade ago. It consists of a cocktail of monoclonal antibodies, proteins that are highly specific for the Ebola virus and that are produced in bioengineered tobacco plants.

In 2012 Mapp, working with scientists at the US Army Military Research Institute of Infectious Diseases (USAMRIID) in Fort Detrick, Maryland, announced that when rhesus macaques received the cocktail an hour after infection by Ebola, all survived. When they received it 48 hours after infection, two-thirds survived.

Last year, ZMapp passed a stiffer test: monkeys that had been infected with Ebola and developed fevers and other symptoms received the intravenous cocktail 104 to 120 hours after infection; 43 percent recovered.

When the US government decided to develop a contingency plan in case of accidental exposure to Ebola by one or two people at a US research facility, it began storing a small amount of ZMapp, according to a source familiar with the contingency plan. ZMapp was chosen because the science is relatively easy to understand and the risks considered relatively small, the source said.

The stock of Tekmira soared on expectations its Ebola drug might speed towards approval due to the crisis, or even be used in the current outbreak.

Under a 140-million-dollar contract with the US Department of Defense, it is developing a drug based on a genetic technology called RNA interference. The idea is to take strands of genetic material that are the virus’s mirror image and, using nanoparticles, slip them into cells where Ebola is replicating. In theory, the RNA disables the virus.

In July, Tekmira announced that its early-stage human trial had been put on hold by the US Food and Drug Administration, which had concerns about the drug’s safety.

Profectus BioSciences has also tested its Ebola vaccine in monkeys, with good results.

In a study with scientists at government biomedical research centers and the Pentagon, Profectus found that a single intramuscular injection protected all of the rhesus monkeys exposed to Ebola three weeks later. The company hopes to launch a human trial to assess the vaccine’s safety within the next 12 months.

An experimental vaccine similar to Profectus’s, developed by academic and government scientists, was rushed into emergency use only once. In 2009 a scientist in Germany working with Ebola-infected guinea pigs pricked her finger with a syringe containing the virus. The vaccine was flown from Canada, one of the sites where it was being developed. The scientist got that vaccine in less than 40 hours and survived.

VSV-EBOV was developed by the Canada’s National Microbiology Laboratory and is licensed by Ames, Iowa-based NewLink Genetics Corp. While vaccines normally are preventatives, the VSV-EBOV vaccine has shown effectiveness in studies on animals after they were exposed to the virus, according to Bloomberg.