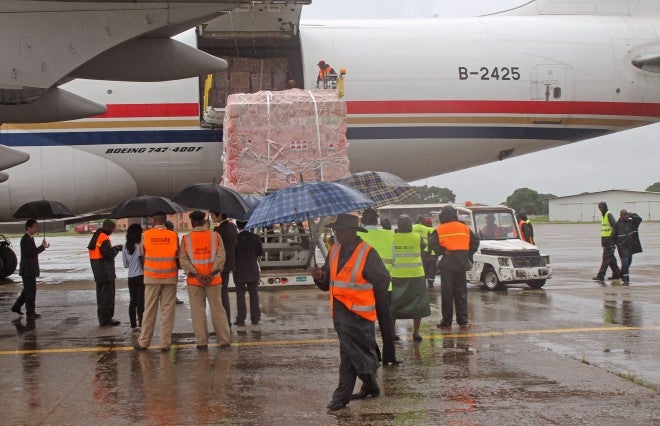 In this photo taken on Monday, Aug. 11 2014, workers unload Ebola related aid goods from China at the airport in Conakry , Guinea. Over the decades, Ebola cases have been confirmed in 10 African countries, including Congo where the disease was first reported in 1976. But until this year, Ebola had never come to West Africa. AP

FREETOWN—Eight Chinese medical workers have been placed in quarantine in Sierra Leone, as health experts grappled Monday with ethical questions over the use of experimental drugs to combat the killer Ebola virus.

The World Health Organization scrambled to draft guidelines for the use of experimental medicines at a meeting in Geneva as the death toll from the worst Ebola outbreak in history neared 1,000.

There is currently no available cure or vaccine for Ebola, one of the deadliest viruses known to man, which the WHO has declared a global public health emergency.

The disease has hit doctors hard in the ill-equipped and fragile health systems of the worst-hit west African nations, Guinea, Liberia and Sierra Leone.

Chinese ambassador to Sierra Leone Zhao Yanbo told journalists seven doctors and one nurse who treated Ebola patients had been placed under quarantine, but would not be drawn on whether they were displaying symptoms of the disease.

In addition 24 Sierra Leonean nurses, most from the military hospital in the capital, have also been placed under quarantine, according to figures from Yanbo and hospital director Dr Sahr Foday.

Foday said a senior physician at Freetown’s Connaught Hospital had contracted Ebola and was responding well to treatment. The nation’s sole virologist, who was at the forefront of its battle against the epidemic, died from Ebola last month.

Yanbo handed over Ebola protection kits, disinfectants and other medical material, which China also donated to Liberia and Guinea on Monday.

In Liberia — where Ebola has already claimed over almost 370 lives — a third province, Lofa, was placed under quarantine on Monday after similar measures in Bomba and Grand Cape Mount.

“From now on, no one will be allowed to go to Lofa, no one will come out of there,” President Ellen Johnson Sirfleaf said. “We want to protect areas that have not been yet affected.”

While impoverished Guinea, Liberia and Sierra Leone account for the bulk of the cases, the latest outbreak has spread further afield. Nigeria, Africa’s most populous country, has so far counted two deaths.

Numerous countries have imposed a raft of emergency measures, including flight bans or screening of passengers.

In the latest such move, the Ivory Coast announced on Monday it was banning all flights from the three hardest-hit nations.

And it said in the past few days it had turned back around 100 Liberians trying to flee across the border into Ivory Coast, which not reported any Ebola cases.

Niger, which also has yet to confirm any cases, has put in place an “emergency plan” at a cost of 183,000 euros ($250,000), boosting checks at borders, airports and stations and training healthworkers, government said Monday.

Togo has also strengthened health screenings, but people in the capital Lome are far from reassured.

Ebola causes fever and, in the worst cases, unstoppable bleeding, and can be fatal in 25 to 90 percent of cases, according to the WHO.

The virus spreads by close contact with an infected person through bodily fluids such as sweat, blood and tissue.

The latest outbreak — which the WHO says is by far the worst since Ebola was discovered four decades ago — has left 931 dead and infected nearly 1,800, a mortality rate of up to 60 percent.

Ethical thing to do?

The use of an experimental drug called ZMapp on two Americans and a Spanish priest infected with the virus while working in Africa has opened up an intense ethical debate.

The drug, made by private US company Mapp Pharmaceuticals, has shown promising results but is still in an extremely early phase of development and had only been tested previously on monkeys.

ZMapp is in extremely short supply, but its use on Western aid workers has sparked controversy and demands that it be made available in Africa.

“Is it ethical to use unregistered medicines to treat people, and if so, what criteria should they meet, and what conditions, and who should be treated?” said WHO assistant director-general Marie-Paule Kieny ahead of Monday’s meeting.

“What is the ethical thing to do?”

A Ghanaian priest became the third member of a Spanish charity which the evacuated priest worked with to die from the virus.

In Guinea, where the outbreak first erupted in March, President Alpha Conde urged investment in the health system to better deal with health crises.

“The most important … is to have the capacity to face epidemics in our hospitals, to have enough laboratories and trained doctors. Ebola will pass but tomorrow, there could be another disease.”