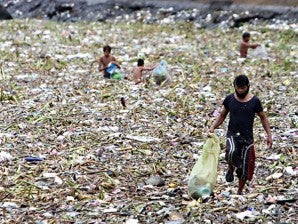 MANILA, Philippines—Environmentalists trooped Tuesday to the Department of Environment and Natural Resources, warning the agency of a law suit if it pursues plans to allow the burning of garbage as a means to manage solid waste.

The groups made the demand while the commission held a meeting Tuesday at the DENR main office in Quezon City.

In their letter to Environment Secretary Ramon Paje, who chairs the waste management commission, the groups said, “We write to convey to you our strong objections to the proposed guidelines on waste-to-energy technologies that the NSWMC is planning to develop as evidenced by its proposed resolution creating a multi-agency sub-group.”

They alleged that creating the sub-group was tantamount to allowing all forms of waste-to-energy technologies, including incineration, in the country.

“Without limiting the guidelines that the multi-agency sub-group will be tasked to create to non-burn or non-incineration waste-to-energy options only, we are afraid that this direction represents a clear attempt to undermine the intent of both the Clean Air Act and the Ecological Solid Waste Management Act,” they said, stressing that waste incineration is prohibited by both laws.

“While resource recovery is allowed under the Ecological Solid Waste Management Act, such options should not include incineration… We would like to emphasize that the failure to implement RA 9003 should not be used as an excuse by the DENR, the NSWMC and by LGUs—the very agencies mandated to implement the law—to resort to the use of waste incinerators disguised as waste-to-energy facilities,” the groups’ statement said.

The groups said that the inability of the government agencies to enforce the law “would already warrant the filing of legal cases against erring and irresponsible agencies.”

They added, “The government’s failure to comply with the provisions of the above-mentioned laws (Republic Acts 9003 and 8749) will leave us with no other option but to resort to taking the necessary legal remedies.”

“We are not against resource recovery, including the generation of energy from wastes… In fact, we promote resource recovery, but it should not employ incineration,” Mendoza, who also chairs the Mother Earth Foundation, said in a statement citing anaerobic digestion as an example of resource recovery where methane from decomposing biodegradable waste is collected as energy.

EcoWaste national coordinator Aileen Lucero said, “If wastes are dealt with according to the law, only a mere 2 percent to 4 percent of generated wastes would be available for incinerators to burn, which makes waste-to-energy incineration highly unworkable.”

She further added, “The NSWMC cannot afford to violate the very law that created it, rather, it should focus all its energies on upholding the Ecological Solid Waste Management Act.”

The waste management commission or NSWMC is the agency tasked to implement Republic Act 9003, which calls for the creation of a national program to manage the control, transfer, transport, processing and disposal of solid waste. The commission drafts policies to enforce the act and oversees the implementation of solid waste management plans by local government units.