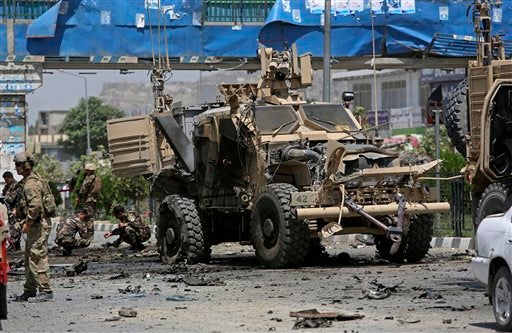 NATO and Afghan security forces inspect at the site of a suicide attack in Kabul, Afghanistan, Sunday, Aug. 10, 2014. AP

KABUL, Afghanistan — Amnesty International says the US has failed to properly investigate Afghan civilian deaths, even possible war crimes, which occurred during military operations in Afghanistan.

Amnesty criticized the U.S. and NATO in a report released on Monday in Kabul.

The group says it investigated 10 incidents between 2009 and 2013 during which civilians were killed during U.S. military operations.

But the group said none of the cases they investigated were prosecuted by the military.

Most of the incidents were related to air strikes and night raids carried out by U.S. forces. Both tactics have sparked heated criticism from the government and Afghan civilians who say the U.S. doesn’t take enough care to prevent civilian deaths.

Read Next
Nuke research institute among lowest funded in proposed DOST budget
EDITORS' PICK
SMDC’s Bloom Residences: A master planned community that cares for your health and wellness
COVID-19 cases in PH pass 3.2 million mark with 37,154 new cases — DOH
Over 3 Million worth of prizes to be won at Smart Padala’s SENDali Manalo Promo!
Upsilon, Unilever give ‘real talk’ on climate change crisis
What to expect as Metro Manila starts ‘no vaccination, no ride’ policy on Monday
Metro Manila’s daily COVID-19 growth rate drops to 2% — Octa Research
MOST READ
Tito, Vic and Joey still not quitting, breaking trends as they celebrate 50th year in the biz
‘Not my loss’: Did Kris Aquino just comment on her breakup with Mel Sarmiento?
Wendell Ramos finally gets to hold his newborn for the 1st time
At least 1.04 million Metro Manila residents may have COVID-19 – OCTA Research
Don't miss out on the latest news and information.