Aquino tells dedicated cops: You will be properly compensated 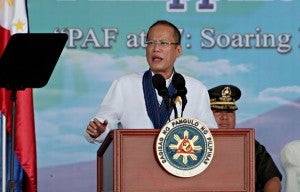 MANILA, Philippines – President Benigno Aquino III assured on Friday that his administration would continue the reforms it started in the Philippine National Police (PNP) despite the Supreme Court’s decision to declare parts of the Disbursement Acceleration Program (DAP) unconstitutional.

Speaking at the 113th Police Service Anniversary at Camp Crame in Quezon City, Aquino said his administration would continue the modernization program of the country’s police and military forces.

“Huwag kayong mag-alala na ‘di matutupad ang ating plano para sa ‘shoot, scoot, and communicate,’ dahil sa naging desisyon sa DAP [Don’t be worried that our plans to ‘shoot, scoot and communicate’ may not be implemented because of the decision on DAP],” he added.

He cited the reforms in the country’s police force, including the 1:1 ratio in terms of one pistol for every policeman, the Automated Fingerprint Identification System (AFIS) and the Crime Incident Recording System, which significantly helped the PNP in solving crime cases.

The president also mentioned that 98 percent of housing projects for police and military officers have been completed.

He also mentioned that the government was now in the process of hiring at least 30,000 non-uniformed personnel to do administrative works in the PNP. According to him, this initiative will allow uniformed police to focus on their jobs in the field.

However, while there is a need to hire more policemen, the president said fixing the erroneous pension system in the PNP was his administration’s priority.

He blasted the previous administration for its lack of concern to the PNP.

“Ang dinatnan natin: Walang sistemang pampensyon para sa inyo, kaya taon-taon, kailangang paglaanan ng pondo sa ating pambansang budget ang pension [What we saw: No system of pension for you, that’s why it’s important to have a budget for the pension],” he said.

The government will need more than P4 million to fix the pension system — an amount higher than the 2015 budget, he said.

He assured the PNP that the government would properly compensate the police by allocating funds for their pension in the yearly budget of the government.

“This is what straight governance is all about: The needs of our uniformed policemen are met. The law enforcers are taken care of and loved by the government and the state,” he said.