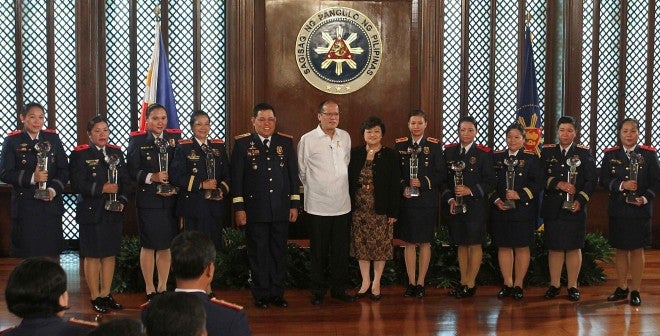 MANILA, Philippines – Through the exemplary work of lady cops, the police force is now on better footing with the populace, President Benigno Aquino III said on Tuesday.

(This level of loyalty and dedication of your fellow policewomen have resulted in renewed trust and admiration by the people.)

The ten policewomen, awarded last January 23, were chosen for their service record and achievements.

They are just as skilled and capable as their male counterparts but with an added touch of motherly care was how Aquino and Purisima described the nation’s crop of policewomen.

During his speech, Aquino recalled the recent episodes of heroism by policewomen — from single-handedly subduing a thief to enduring a six-kilometer walk after super typhoon “Yolanda” (international name: Haiyan) hit Tacloban.

(Who won’t be impressed by the success and honor achieved by our awardees?)

The President pointed out that policewomen were also crucial in expanding social services in communities. He said it is the guidance of cops like them that many Filipinos were saved from the dangers of illegal drugs and violence.

(Through your efforts, many communities are now peaceful, the citizens assured that they will be able to lead honorable lives.)

Purisima shared that one of the awardees, Police Supt. Maria Leonora Chua Camarao, officer-in-charge of Discipline Law and Other Division under the Directorate for Personal and Records Management, helped resolve 2,000 cases and dismiss more than 100 erring policemen, in support of the PNP’s campaign “to cleanse our ranks of misfits in uniform.”

He lauded Police Chief Inspector Gemma Vidal Braganza who led the arrest of dozens of criminals, especially those charged with rape. Braganza is the Regional Chief of the Women and Children Protection Desk of the police regional office in Cordillera.

Also cited was PO3 Annliza Palicpic Flores of the Police Community Relations for her storytelling sessions in the slums of Manila as part of PNP’s literacy initiatives. Purisima said such activities “make our youth more productive and less prone to crime.”

The other awardees were:

Of the 10, only Bañares was not able to attend the courtesy call because of her pregnancy.