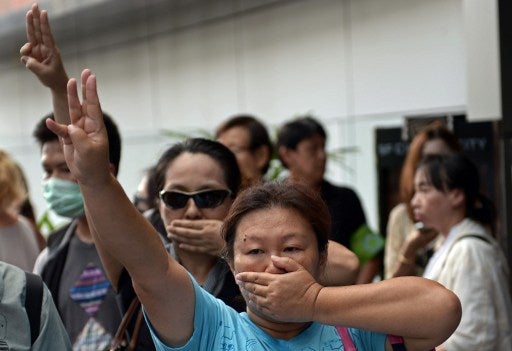 Anti-coup protesters flash “freedom signs” during a gathering at a shopping mall which was broken up by security forces in downtown Bangkok on June 1, 2014. AFP

BANGKOK — Opponents of Thailand’s military coup are risking arrest by flashing the three-finger salute from the “Hunger Games” movies to defy a junta that has banned all public protests.

The gesture has become the unofficial symbol of resistance against a military regime that has suspended democracy and severely curtailed freedom of expression.

“Showing three fingers has become a symbol to call for basic political rights in a country ruled by one person as if with the most sovereign power, who is General Prayut Chan-O-Cha,” Sombat Boonngamanong, a prominent activist wanted by the junta, wrote on Facebook.

Critics of the May 22 coup, including the youngest daughter of ousted former premier Thaksin Shinawatra, have posted photographs of themselves flashing three fingers on Facebook and other social media sites.

“Dear #HungerGames. We’ve taken your sign as our own. Our struggle is non-fiction,” wrote one Twitter user.

In the “Hunger Games” movies, the residents of a dystopian future North America — who are forced to compete in a televised death match — initially use the gesture to mean thanks, admiration and good-bye to someone they love.

It later becomes a more general symbol of their uprising against a wealthy, totalitarian regime.

In Thailand some protesters say the salute is also a nod to the French revolutionary motto “liberty, equality and fraternity”.

The military — which has imposed martial law, controls on the media and a night-time curfew — has warned that people flashing three fingers could face arrest under its ban on public protests.

“If they gather as more than five people and show the symbol of three fingers then it’s against the law,” army spokesman Winthai Suvaree told reporters.

But he suggested that people posting photos on the Internet were unlikely to be detained, saying coup makers were “not paying any attention” to the three-finger salute by Thaksin’s daughter.

The junta mounted a show of military strength over the weekend to deter small but defiant anti-coup flashmob rallies that popped up outside shopping malls and near train stations in the capital Bangkok.

Six people were arrested, included a woman shoved into a taxi by undercover police apparently disguised as journalists.

Security forces, many carrying riot shields, were deployed, backed briefly by an armoured humvee with a soldier manning a mounted machine gun.

The army has warned protesters that they — and even their families — face punishment under strict martial law, which has imposed sweeping curbs on freedoms.

“The Bangkok street protesters’ three-fingered Hunger Games salute is a symbolic act of peaceful defiance by those who recognize — like those in the rebellious districts in the movie — that they face overwhelming odds but decide to bravely raise their voices nonetheless.”

The coup makers said they were forced to seize power after nearly seven months of anti-government protests which saw 28 people killed and hundreds of others wounded.

Prayut, the army chief, has said elections are not expected to be held for at least a year to allow a new constitution to be drawn up in an effort to end a political crisis stretching back almost a decade.

Critics accuse the junta of using the violence as a pretext for a long-planned power grab by the military-backed royalist establishment which loathes Thaksin, who was himself ousted in a coup in 2006.

The billionaire tycoon-turned-populist politician lives in self-exile in Dubai to avoid jail for a corruption conviction.

Thaksin or his allies have won every election in more than a decade, including in 2011 under his younger sister Yingluck Shinawatra, helped by strong support among voters in the northern half of the country.