Boy chokes to death on a fish ball | Inquirer News

Boy chokes to death on a fish ball 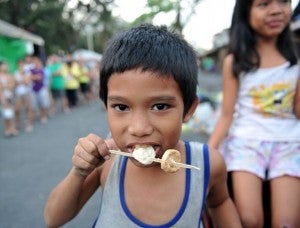 A boy eats a fishball at an informal settlers area in Manila on February 16, 2011. AFP FILE PHOTO

The deceased was identified as Lim Wei Kiat.

The incident occurred at about 4 p.m. Tuesday, June 2, when Wei Kiat took the delicacy from his mother at a relative’s house at Resort Home in Persiaran Cinta Sayang.

The boy popped the fish ball, which was the size of a 50 sen coin, in a hurry, imitating how his mother was eating it then

However, it got stuck in his throat and his mother tried in vain to get it out.

A relative, identified only as Wong, rushed him to the Sultan Abdul Halim Hospital for treatment.

Medical assistants at the hospital’s emergency unit tried to save him, but the boy died three hours later due to insufficient oxygen.