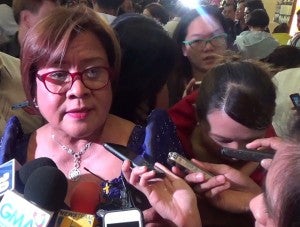 “We will definitely appeal that decision. I will ask the Office of the Solicitor General to file a motion for reconsideration,” De Lima said in a text message.

Last Friday, the Court of Appeals Former Special 10th Division reversed the Justice Secretary’s decision to indict Phoenix Petroleum Philippines Inc., its president and chief executive officer Dennis Uy and customs broker Jorlan Cabanes, for violations of the Republic Act No. 1937, or the Tariff and Customs Code of the Philippines (TCCP).

The appeals court ruled that Uy and Cabanes were deprived of due process when De Lima set aside the earlier resolution issued by Justice Undersecretary Francisco Baraan III that recommended the dismissal of the case against the respondents.

The court noted that in reversing Baraan’s resolution based on the new pieces of evidence and allegations presented by the Bureau of Customs, De Lima committed grave abuse of discretion by failing to give Uy and Cabanes the opportunity to refute the new allegations.

“This court cannot simply shut its eyes to the obvious fact that new arguments and allegations, much more new documents, were improperly raised in the BOC’s reply since these matters substantially amended the charges and accusations against Cabanes and Uy,” the decision stated.

The appellate court also declared that Baraan was correct in holding that the bureau failed to adequately show the purportedly fraudulent acts of the respondents and that the records of the case were “bereft of any competent evidence” showing that there was a finding of fraud or fraudulent practice committed by Uy and Cabanes.

In a resolution issued April 24 last year, De Lima found probable cause to criminally charge Uy and Cabanes over fraudulent importations of gas oil, unleaded gasoline and other petroleum products at the ports of Davao and Bauan, Batangas, from June 2010 to April 2011.

The BOC earlier filed a complaint at the Department of Justice against Phoenix Petroleum, Uy and Cabanes for non-payment of excise and value-added taxes and non-submission of import documents in violation of Sections 3601 and 3602 of TCCP.

The DOJ had held that the respondents “had personal knowledge of and direct participation in the operations of Phoenix, including the processing and release of shipments that were already abandoned in favor of the government for failure to file import entries within 30 days from discharge of goods.”