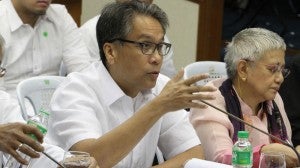 The four policemen were freed last Tuesday by New People’s Army (NPA) rebels which held them captive for 19 days in eastern Mindanao. The release was facilitated by Roxas.

Roxas and PNP Director General Alan Purisima personally welcomed  last Tuesday the freed policemen, who were captured by the NPA in a July 10 raid of the Algeria town hall in Surigao del Norte.–Julie M. Aurelio