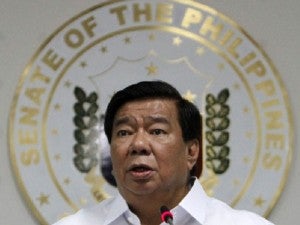 MANILA, Philippines–Senate President Franklin Drilon has called on the Commission on Elections (Comelec) to fast-track the adoption of measures that would allow some 12 million overseas Filipinos to register and vote online for their favored candidates in the 2016 elections.

Drilon said he was frustrated that only about 2.5 percent of the 10 to 12 million Filipinos abroad were able to register and vote in Philippine elections in the past few years because polling centers in Philippine embassies and consulates were too far from their places of work and residence.

The low turnout has persisted even if a lot of funds and other resources have been channeled to the endeavor, Drilon added.

At present, overseas Filipino workers have to personally appear at embassies or consulates or mail their ballots, in order to register and join the electoral exercise in the Philippines, he noted.

Election officials should now ensure that programs would soon be in place to allow Filipinos abroad to use the Internet to register and vote, he said.

“It is high time that the Comelec adopt all the necessary technologies that would empower the about 10 to 12 million overseas Filipinos to use the Internet to register and vote in 2016 and onwards, without leaving their jobsites or residences abroad,” Drilon said in a statement Sunday.

The Comelec must begin studying the technologies that other countries have used in Internet voting, he added.

Drilon noted as well that the Comelec Advisory Council had pushed for the use of new technologies, such as online voting and recent innovations in Direct Electronic Recording equipment.

Security concerns could be addressed through sophisticated data encryption and other technologies, he said.

He also pointed out that some 20 countries, including the United States, France, Germany, Italy and Australia, practice online absentee registration and voting. Thus he said there was no reason the Philippines could not follow suit.

In France, more than 1.5 million absentee voters cast their votes through the Internet, and this shows the task is doable, he said.

In illustrating the urgent need for online registration and voting, Drilon pointed out that the Department of Foreign Affairs was prompted to issue a circular directing Philippine foreign service posts to first register passport renewal applicants as overseas voters before renewing their passports because so few OFWs were joining the polls.

But this has still not resulted in a significant change in the number of overseas absentee voters, he said.

He said OFW groups, immigrants, seafarers and Filipino students abroad have long complained that traveling to overseas absentee voting centers, which were too far from where they were working or living, posed a problem to them and hindered them from voting.