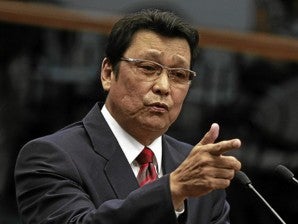 CITY OF SAN FERNANDO, Philippines—The Office of the Ombudsman has approved the filing of graft charges against Sen. Lito Lapid in connection with the overpricing of 3,880 liters of liquid fertilizer bought by the provincial government in 2004 when he was governor of Pampanga province.

An Ombudsman task force has found that the P5 million used to buy the fertilizer came from agricultural funds that were allegedly diverted to the campaign of then President Gloria Macapagal-Arroyo in 2004, a scandal that became known as the P728-million fertilizer fund scam.

Ombudsman Conchita Carpio Morales signed the resolution for the filing of graft charges against Lapid and six others on June 3.

The fertilizer scam case is the eighth graft case to be filed in the Office of the Ombudsman against Lapid since he was elected governor in 1995 and the second to be ordered sent to the Sandiganbayan for trial.

In a statement sent to the Inquirer on Thursday, Lapid said he had no information about the resolution of the case.

He said the case was still pending in the Office of the Ombudsman, which he had requested to do a “judicious and fair review” of the matter.

“I request that we avoid second-guessing. Instead, we should hope that the concerned people in the Ombudsman would scrutinize every side of this issue so they could issue a lawful resolution,” Lapid said.

The Ombudsman resolution said the provincial government headed by Lapid bought the fertilizer for P4.8 million, at P1,250 per liter, without a competitive public bidding.

Without competitive bidding, the provincial officials involved gave “unwarranted benefit to the suppliers,” the resolution said.

Had the provincial government called a public bidding, it could have bought equal or better-quality fertilizer at the lowest price possible, the resolution said.

Carried out without competitive public bidding, the transaction violated the Anti-Graft and Corrupt Practices Act (Republic Act No. 3019), the Government Procurement Act (RA 9184), and the Revised Penal Code, the resolution said.

The resolution said Lapid requested the Department of Agriculture regional office in Central Luzon to release P5 million allotted to Pampanga on May 17, 2004, after being informed by Vasquez on May 12, 2004, that Macro-Micro’s quotation for foliar fertilizer was P1,250.

“Lapid also issued, and upon Yabut’s certification of cash availability, approved on May 21, 2004, [Purchase Request] No. GO-109 specifically detailing that 3,880 liters of Macro-Micro Foliar Fertilizer will be purchased at P1,250 per liter or for P4.850 million as well as the certification that no suitable substitute of the same quality as the aforesaid fertilizer and the same will be procured through direct purchase from MPTC,” the resolution said.

It said the Ombudsman’s Task Force Abono, which investigated the case, found two companies that offered liquid fertilizer at P120 to P150 a bottle.

MPTC, it said, has no license to operate and no certificate of product registration from the Fertilizer and Pesticide Authority (FPA).

The resolution said the farmers who supposedly received the fertilizer denied getting any from the provincial government in 2004.

Lapid allegedly used P5 million from his Priority Development Assistance Fund (PDAF) allocation in 2011 for the purchase of antidengue inoculants in Polillo town, Quezon province, although no dengue cases were reported there.

An Inquirer report in July 2013 said P5 million from Lapid’s PDAF also went to each of the towns of Teresa, Baras and Pililla in Rizal province for projects.

In that report, lawyer Filmer Abrajano, Lapid’s chief legal officer, said the pork-funded projects in the four towns, costing a combined P20 million, were legitimate and listed online by the Department of Budget and Management.