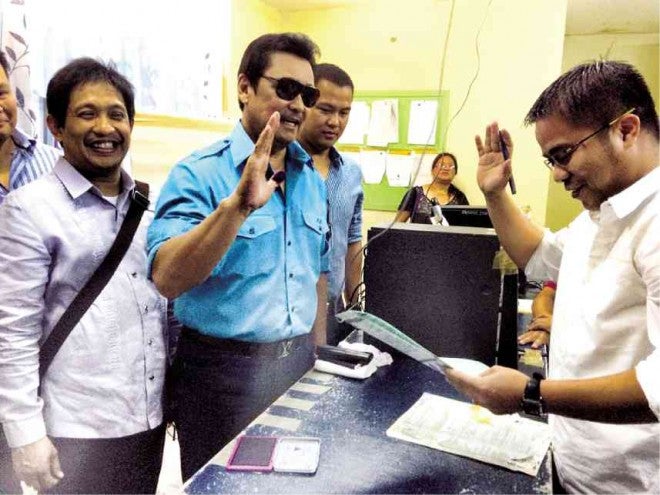 SEN. LITO Lapid transfers his voter’s registration to Angeles City, which one of his allies said was a step to qualify him to run for mayor of the city or representative of Pampanga province’s first district. CONTRIBUTED PHOTO

ANGELES CITY, Philippines—Senator Lito Lapid has transferred his voter’s registration to this city, where he is reportedly planning to run as mayor or representative in the 2016 elections.

Lawyer Filmer Abrajano, Lapid’s chief of staff, said the senator changed his residence from Porac town, also in Pampanga province. In April, he had a new house blessed on Friendship Plaza in Barangay (village) Pampang here.

The election law requires political aspirants to establish a year of residency in a place where he or she intends to seek local office, Lobo said.

Abrajano said Lapid, 59, had not made up his mind on whether to run as mayor of Angeles City or as representative of the first district, currently represented by Rep. Joseller Guiao.

Abrajano said the senator would not challenge Pampanga Gov. Lilia Pineda, who is eligible to seek a third term in 2016.

Lazatin said the senator was not seeking public office in his hometown of Porac because the “contest there is more difficult.”

Lapid did not pursue his gubernatorial bid in 2010 and opted for a second term in the Senate, making the fight a two-way race between Pineda and former Gov. Eddie Panlilio.

The nine years that Lapid spent at the capitol from 1995 to 2004 saw the filing of seven graft cases against him. All cases were dismissed. Tonette Orejas, Inquirer Central Luzon