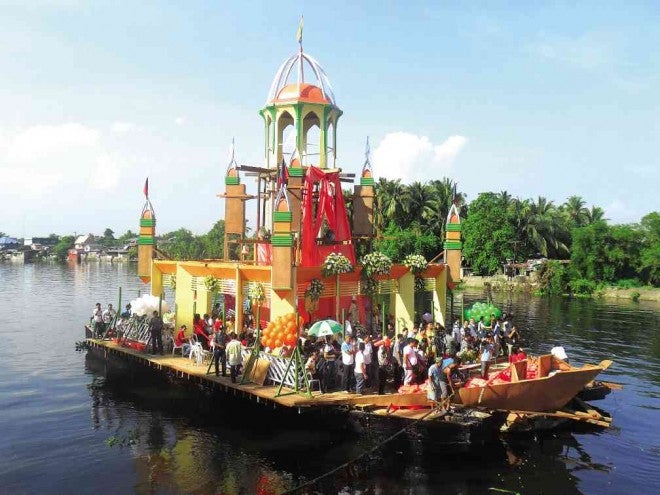 A THREE-STORY-HIGH pagoda rises over Bocaue River, as residents of the Bulacan town revive the colorful fluvial parade for the Feast of the Mahal na Krus sa Wawa. CARMELA REYES-ESTROPE/INQUIRER NORTHERN LUZON

BOCAUE, Bulacan—Like the mythical phoenix, a new pagoda will rise to ferry Catholic devotees and a venerated wooden cross along Bocaue River during the grand fluvial parade of the annual Feast of the Mahal na Krus sa Wawa here next week.

The pagoda will sail on three large boats and should be sturdy enough to accommodate a maximum of 250 devotees, its builders said.

The feast’s organizers said they hoped that people will no longer look back at 1993, when a pagoda sank during the festivities and killed about 300 devotees.

On Wednesday, local and church officials unveiled the 48-foot pagoda that will carry devotees in the fluvial parade during the nine-day novena, which starts today

The fluvial procession will be held every 7 p.m. until July 5 and will cover a 1.5-kilometer section of Bocaue River spanning the villages of Bunlo, Biñang 1st, Lolomboy, Sulucan, Poblacion and Bambang. On the feast day, July 6, the fluvial parade will be held at 9 a.m.

Msgr. Alberto Suatengco, Bocaue parish priest, said church and local officials decided to revive the grand procession and the building of a traditional pagoda after considering safety measures that will protect devotees.

He said human error caused the tragedy on July 2, 1993. “It was overloading that caused the accident. Now, we will limit [the pagoda’s passengers to] only 250,” he said.

He said the wooden pagoda would be reinforced by steel and mounted on three large boats rented from Malabon in Metro Manila. The Krus sa Wawa will be displayed on a tower-like structure on the pagoda’s third floor.

All passengers of the pagoda will be required to register and wear life vests. “No name in the manifesto, no life vest, no boarding,” De la Cruz said.

Suatengco said the Philippine Daily Inquirer donated 250 life vests to ensure the safety of devotees during the fluvial procession.

Businessman Ruben Mercado, fiesta committee chair, said they were reviving the grand fluvial parade to bring back economic activities to Bocaue. Local businesses started to decline when the celebration was scaled down after the 1993 tragedy, he said.

Older residents here said the devotion to the Krus sa Wawa started in the 1800s, when a wooden cross was found in the river amid a strong current whipped up by a typhoon. They said the cross came from the town’s old church that had been gutted by fire. The cross has since been kept in a riverside church in Barangay (village) Bambang here.