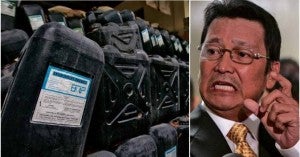 A sixth senator has been implicated in the alleged misuse of pork barrel funds, but this time, no bogus nongovernment organizations (NGOs) were involved.

Sen. Manuel “Lito” Lapid provided P5 million from his pork, formally called Priority Development Assistance Fund (PDAF), in 2011 for the purchase of “antidengue innoculants” to Polillo town in Quezon province, although there was no reported case of dengue fever in the municipality that year.

Five million pesos also went to each of the towns of Teresa, Baras, and Pililla in Rizal province, for a total of P20 million.

The racket was the subject of a series of Inquirer reports, which prompted calls among lawmakers for the abolition of the pork barrel. The Aquino administration, however, has allocated P27 billion for the PDAF in its proposed national budget next year.

Lapid did not answer calls to his two mobile phones on Thursday when the Inquirer sought him for comment  on the use of his PDAF. But his chief legal officer, lawyer Filmer Abrajano, said the pork-funded projects in the four towns were legitimate and had been included on the online list of the Department of Budget and Management (DBM).

“Those are on the DBM website,” Abrajano said by phone. The Inquirer checked the website but did not find the projects among the Senate’s PDAF-funded projects from 2010 to 2013.

Upon the senator’s request, the DBM issued Special Allotment Release Order G-11-01999 on Dec. 13, 2011, for P20 million to be divided equally to Polillo, Teresa, Pililla and Baras. The order was signed by Budget Undersecretary Mario Relampagos.

In a letter dated Dec. 19, 2011, Abrajano informed then Polillo Mayor George Verzosa about the fund release as per the local official’s “funding request” for the purchase of “effective microorganisms probiotics microbial innoculant for antidengue.”

It could not be ascertained at press time if Verzosa actually requested the funding. The Inquirer has been trying to reach him through his mobile phone, but he hasn’t returned the calls or replied to text messages.

“There were no recorded dengue cases in Polillo in 2010 and 2011 … There was one in 2012,” municipal health officer Dr. Michael Caampued told the Inquirer in a phone interview. “I was not requesting anything. We do not need any antidengue solution [at that time].”

Ironically, Caampued’s signature appeared on the purchase request for the solutions, a copy of which was obtained by the Inquirer. When Verzosa informed him about the delivery of the solutions, the health officer told him in Filipino that the mixture was not needed if it was meant only to prevent or control a dengue outbreak.

In January 2012, documents explaining the nature of the solutions were presented to Caampued. Somehow he was convinced that it could benefit the community after finding that it could also act as a larvicide.

“For as long as it is a larvicide, it can be acceptable,” he said, noting Polillo’s major health concerns involving mosquito-borne diseases, such as malaria and filariasis.

Upon signing the purchase request, Caampued put his confidence in the municipal bids and awards committee (BAC), expecting that it would make sure that the chemical mixture was tested and certified by the Food and Drug Administration.

On bidding day on Jan. 31, 2012, municipal officials were stunned that the truck carrying 7,142 liters of “antidengue innoculants” in 320 plastic containers was already at the site. “That was one of our main questions. Why was the truck already there on the very day of the bidding?” Councilor Romel Calzado said.

According to the supplier’s primer, the antidengue solution or EMP “is a microbial-based solution composed of lactic acid bacteria, plant hormones and enzymes from secondary microbial metabolism.”

“[It] promotes the proliferation of other beneficial microorganisms in the environment, like Bacillus thuringiensis, a bacterium that kills the larval stage of most insects like flies and mosquitoes.”

Caampued said the containers were poorly labeled and the delivery did not follow standard procedures. No expiry date was stamped on the containers and no FDA certification number was indicated. An ingredient list of chemical contents was not printed on the sticker.

It was the missing product information, as well as the lack of chemical testing and prior training in the proper storage and usage that prompted the health officer to reject the shipment.

Caampued said he told Innsbruck’s representative in the bidding, Rolly Tolentino, that he was withholding the use of the chemical and that he was not signing the legal acceptance of the delivery until the chemical content is verified and prior training is provided.

On April 17, 2012, Caampued formally raised his concern through a letter to the supplier. “We have to be sure of the content by conducting a series of chemical tests because this may cause an ecological imbalance.”

An ecological disruption can affect not only the people of Polillo but also the rich but threatened biodiversity of Polillo Island, he said.

Innsbruck has not yet complied with the conditions. Hence, the chemical solutions remain idle inside a locked warehouse at the back of the municipal hall.

In a letter dated Feb. 27, 2012, the municipal accountant wrote Verzosa that a number of supporting documents that came with the disbursement voucher was invalid and others were missing. The accountant cited, among other things, that the “financial statements and income tax return are not stamped received by the BIR (Bureau of Internal Revenue)” and that the inspection and acceptance report were unsigned.

But on the same day, BAC chair Samuel Sardua issued a certification saying that he was taking full responsibility and accountability for securing the lacking documents so that “the municipal accountant [can] process and facilitate the payment of [the] contract.”

The Inquirer and the fact-finding team of recently elected municipal officials could not reach Innsbruck through the telephone number printed on its receipt.

When asked about Innsbruck, Lapid’s chief legal officer Abrajano said the senator and his office did not know the company that supposedly implemented his pork-funded projects. “We are involved in the identification of recipients among local governments. But we are not involved in the procurement. That’s the process,” he said.

He said the senator gets “numerous requests” for projects and these are granted after a validation process.

Lapid, he said, “does not personally know the mayors.”

Asked if the senator’s office has validated the implementation of the projects through field checks, Abrajano said: “They (mayors) write us to thank us for the projects.”

Local governments that receive the projects, he said, were subject to the government’s auditing process.—With a report from Tonette Orejas, Inquirer Central Luzon