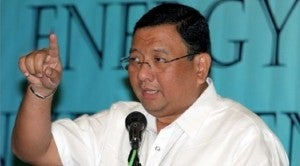 CEBU CITY, Philippines – The Aquino administration submitted to Congress on Wednesday, the P2.6-trillion national budget proposal for 2015, which would involve what Cabinet Secretary Rene Almendras described as the “outcome-based performance-informed budgeting (PIB) strategy.”

Almendras said that in the 2015 National Budget, “everything is detailed.”

“There are no lumpsum amounts,” Almendras said in a forum organized by the Kapisanan ng mga Brodkaster ng Pilipinas (KBP) Cebu chapter

PIB is a scheme that uses performance information in deciding where the funds will go.

PIB, according to Almendras, is different from the traditional line item-based budgeting as it focuses more on outputs and outcomes and places less emphasis on inputs.

Almendras explained that the shift to PIB was in line with the Aquino administration’s goal to strengthen the link between planning and budgeting and to simplify the presentation of the budget to make it more understandable to the public.

Almendras was in Cebu City on Wednesday as he was the guest speaker of a forum with the students of the University of San Jose Recoletos (USJR).

that the DAP was not PDAF (Priority Development Assistance Fund), the congressional pork barrel

“PDAF is a fund approved by Congress. DAP is a program,” he told the students of USJR.

Almendras insisted on the legality of DAP, citing Sec. 38 of the Administrative Code of 1987.

Almendras mentioned that in Cebu, most of the DAP-funded projects here were spent on training under education, specifically skills training supervised by the Technical Education and Skills Development Authority.

Meanwhile, Almendras said President Aquino’s tears during his 5th State of the Nation Address were not scripted.

He said that the portions of the Sona where Aquino was talking about his parents who fought for democracy, the legacy they left, and how he would not let his administration’s detractors take away the gains his presidency had achieved  the past four years were those of Aquino.

“That was not part of the original speech,” Almendras said of the emotional statements of Aquino in his Sona. He added that they were able to submit the copy of the speech at past 2 p.m. on Monday.

“You cannot blame him for what he felt. He is just a human being,” he said.

PH infrastructure budget has doubled since 2011