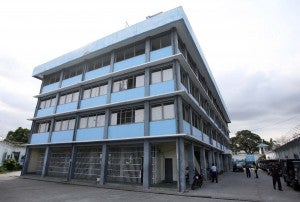 A source from the anti-graft court said Sandigan Presiding Justice Amparo M. Cabotaje-Tang and her members, Associate Justices Samuel R. Martires and Alex L. Quiroz, were satisfied with the jail facilities that they believed offered “humane conditions” for detention.

The Sandiganbayan Third Division handles the plunder charges against Enrile and his co-accused led by Napoles and Reyes.

The source said the justices were satisfied with Camp Bagong Diwa’s cleanliness although Napoles and Reyes were detained in an isolation room with no air conditioner and television sets and a little bit short of the international standard on detention cells. The two would get a daily ration of P50 for food and P3 for medicine.

The source said Napoles and Reyes were staying on separate floors for a week of “psychological adjustment” after which, they would join the rest of their female dorm mates.

The source said the Third Division would still have to decide on where to detain Enrile, who has been given 60 days to prove that his health condition warranted a stay outside a regular jail.