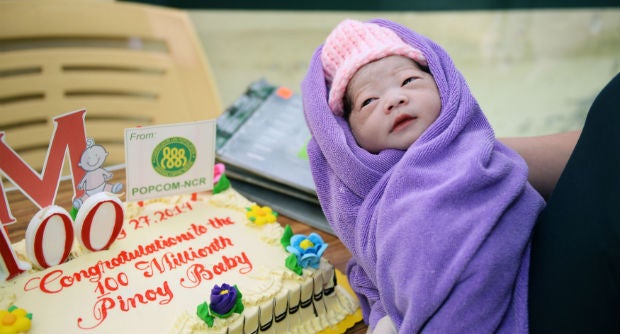 A nurse holds the symbolic “100 millionth Filipino baby”, the baby making the Philippines’ population hit 100 million, during a ceremony shortly after its birth early on July 27, 2014 at a government maternity hospital in Manila. One in three newborns in the Philippines is unwanted or unplanned, the government said, as the country struggles with a population explosion officially reaching 100 million-strong population on July 27. The number of women dying while giving birth in the Philippines had remained high over the past two decades, and the nation was expected to miss a 2015 development target to cut maternal deaths to 52 per 100,000 live births. AFP

MANILA, Philippines – A baby girl born early Sunday has officially pushed the population of the Philippines to 100 million, highlighting the challenge of providing for more people in the already-impoverished nation.

The child, Jennalyn Sentino, was one of 100 babies born in state hospitals all over the archipelago who received the symbolic designation of “100,000,000th baby.”

While a growing population means a larger workforce, it also means more dependents in a country where about 25 percent of people are living in poverty, he said.

He said the Philippines had to find a way to bring services to the poorest families while also lowering the average number of children that fertile women will bear in their lifetimes.

“We’d like to push the fertility rate down to two children per (woman’s) lifetime,” from the current level of an average of three per woman, he said.

While celebrating the birth of the babies with cake and gifts of clothing and blankets, the government will also monitor each of the designated 100 children over the coming years to see if they are receiving the required health services, Perez added.

Jennalyn’s father, 45-year-old van driver Clemente Sentino, said he was grateful for the government aid, but expressed confidence he could support his child and his partner.

He and the child’s mother, Dailin Cabigayan, 27, are not yet married. “She just happened to get pregnant. But we do have plans to get married,” he told AFP.

“I make just enough to get by but at least my job pays regularly. We will find a way to make it fit,” he said.

Efforts to control the Philippines’ population growth have long been hampered by the influence of the Roman Catholic Church, which counts about 80 percent of Filipinos as followers and which disapproves of all forms of artificial birth control.

It was only in April that the government finally overcame over a decade of Church opposition to implement a reproductive health law providing the poor with birth control services.

Perez said with the law’s implementation, about two to three million women who previously did not have access to family planning now do.

Meanwhile, Father Melvin Castro, head of the commission on family and life of the country’s Catholic bishops, was quoted by a church-run radio station as praising the ballooning population, as there would be more “young workers” to power the economy.

Crowded Earth: how many is too many?


Read Next
More than 140 bodies pulled from Gaza rubble in truce – medics
EDITORS' PICK
Nograles: Cabinet members to donate 75% of monthly salary to aid COVID-19 fight
10 Filipinos positive for COVID-19 in UK, 7 in Ireland — envoy
Diokno to Duterte: OK to make fun of buck tooth, but focus on people’s needs first
IATF to LGUs: Issue ordinances vs attacks on frontliners, COVID-19 patients
Robredo spox thanks Duterte for defending VP’s efforts vs COVID-19
Quick chat with Nicole Andersson: ‘You really don’t need much to be happy’
MOST READ
Coronavirus hotbed Rizal to shut borders on April 6
Sotto on Isko Moreno’s call: We do our job without the media following our every move
‘Money Heist,’ ‘Tales from the Loop,’ ‘Killing Eve,’ ‘Never Have I Ever,’ ‘After Life’: Five not-to-be missed series this April
ADB warns PH against prolonged lockdown
Don't miss out on the latest news and information.