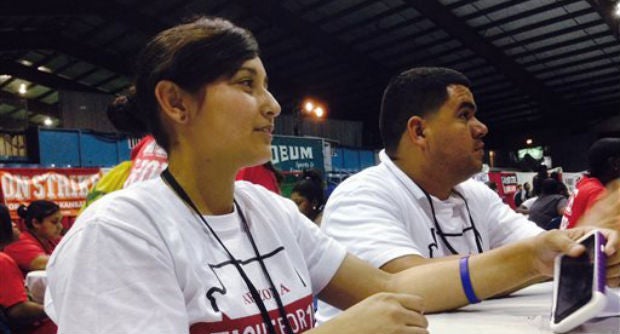 VILLA PARK, Illinois — Fast food workers from across the US voted Saturday to escalate their efforts for $15-an-hour pay and union membership by using nonviolent civil disobedience, comparing their campaign to the civil rights movement.

More than 1,300 workers gathered in suburban Chicago to discuss the future of a campaign that has spread to dozens of cities in less than two years. Wearing T-shirts that said “Fight for $15” and “We Are Worth More,” the workers cheered loudly and said they would win if they stuck together.

The $8.25 an hour she makes working for McDonald’s is not enough to go to college and become a police officer and barely enough to pay her rent, Enriquez said.

The Service Employees International Union has been providing financial and organizational support to the fast-food protests. They began in late 2012 in New York City and have included daylong strikes and a loud but peaceful demonstration outside this year’s McDonald’s Corp. shareholder meeting, where more than 130 protesters were arrested after stepping onto company property.

Saturday’s convention included sessions on civil disobedience and leadership training. Kendall Fells, an organizing director for the campaign and a representative of SEIU, said when and what actions happen next will be up to workers in each city.

The campaign comes as President Barack Obama and many other Democrats across the country have attempted to make a campaign issue out of their call to increase the federal and state minimum wages.

The current federal minimum wage is $7.25 an hour, translating to about $15,000 a year for someone working 40 hours a week, though many fast-food workers get far fewer hours. Obama and others have called for increasing it to $10.10.

Fast food workers say even that’s not enough because most people working in the industry now are adults with children, rather than teenagers earning pocket money.

The restaurant industry has argued that a $15 hourly wage could lead to business closings and job cuts, though the Seattle City Council recently voted to raise the city’s minimum wage to $15 an hour, phased in over several years.

The National Restaurant Association said last week that increasing wages to $15 will not solve income inequality and that the campaign was an attempt by unions to boost dwindling membership. Scott DeFife, the association’s executive vice president of policy and government affairs, said protesters were “demonizing” an industry that employs workers of all ages, backgrounds and skill levels, when the focus should be on policies that increase education and job training.

But many people now are staying with fast-food restaurants for years, because they’re often the only jobs available, workers said.