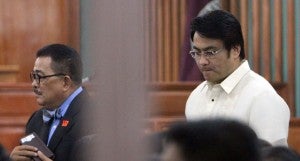 Revilla, who arrived at the Sandiganbayan on Thursday afternoon for his bail hearing, faced off with Luy at the anti-graft court’s first division.

When asked for his message to Luy in an ambush interview, Revilla said: “Tell the truth.”

Luy when asked for his reaction quickly replied,”Yes.”

Luy, who is a second cousin of alleged “pork” barrel mastermind Janet Lim-Napoles, testified for the first time before the Sandiganbayan on the pork barrel scam.