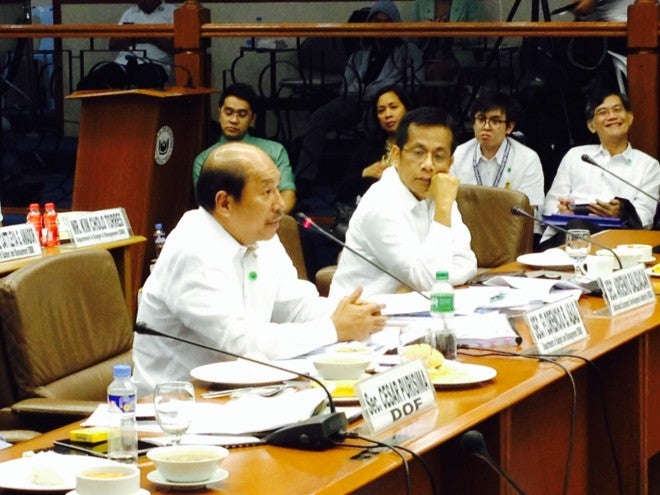 MANILA, Philippines – Senator Nancy Binay on Thursday grilled Budget Secretary Florencio “Butch” Abad over the use of the Disbursement Acceleration Program (DAP) to buy a car worth P5 million for the Commission on Audit (COA) and P70-million allocation for a stem cell research project, among others, of the Lung Center of the Philippines (LCOP).

During the hearing of the Senate committee on finance on DAP,  Binay confronted Abad over COA chairperson Grace Pulido-Tan’s earlier admission in one of the Senate hearings  that a service car of one of the COA’s commissioners came from funds   under the  DAP.

Abad confirmed that a P5-million budget for the car was part of the P143-million allocation given to the COA under the DAP.

“Kasama po ‘yun sa requests nila, Mr. Chair (That is included in their requests),” he told the committee.

But Binay wondered why the funding request for the vehicle did not reflect in the DAP records for COA titled:  “IT infrastructure program and hiring of additional litigation experts.”

“But the mere fact that you gave them money for a car? Bakit hindi nyo sinabi na P5 million lang naman, kunin na lang ‘yan sa savings n’yo (Why didn’t you just tell them to get the P5 million from their savings)” Binay asked.

“Sa totoo lang, malaki ho ang hiningi nila d’yan e kung hindi ako nagkakamali. At nagkaroon ng mahabang usapan hanggang  nauwi d’yan sa halagang yan (Honestly, they were asking for a bigger amount for that (purchase) if I am not mistaken. We had a lengthy discussion until we reached that amount),” Abad said.

Binay earlier questioned the P143-million DAP-funds allocation for the Commission when it has P3.5 billion savings from unfilled positions in the office.

Abad said they also pointed that out to the COA when it requested additional funds but said they were told that the savings would be used to repair their other offices in the provinces.

”So you allow cross-borders? Bigyan na lang additional allocation (Give it additional funds)…?” the senator asked.

But Abad pointed out it was the first time in four years of the Aquino administration that the COA had approached the DBM.

Before this, Binay also questioned the P70-million allocation under the DAP to fund LCOP’s stem cell research program, among others.

The money, she said, should have been used to buy P1,400 hospital beds in government health facilities.

But Health Secretary Enrique Ona, who was also at the hearing room, defended the   budget, saying about 8,000 to 10,000 hospital beds had already been distributed by the government.

Binay then asked why the money was not used instead on government’s campaign against dengue.

“Why so special in stem cell?” the senator asked.