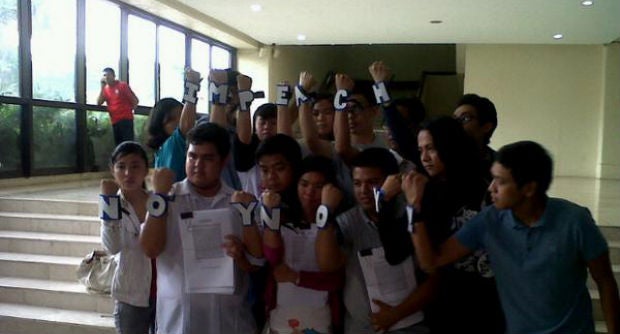 The Youth ACT NOW and members of the League of Filipino Students filed the impeachment complaint Tuesday morning at the secretary general’s office of the lower house.

The complaint was endorsed by Kabataan partylist Representative Terry Ridon.

The group said Aquino must be held accountable for the culpable violation of the constitution, betrayal of public trust, and graft and corruption over the DAP, parts of which were declared unconstitutional by the Supreme Court.

“Aquino has turned into the monster he swore to slay: A tyrannical ruler who transformed the gargantuan amount of over 150 billion pesos of Congress-appropriated public funds into his own pork barrel, who arrogantly refuses to recognize, respect and obey the valid order of the Supreme Court that has found his pork barrel unconstitutional,” the prefatory of the complaint read.