Initial breakdown of passengers’ nationalities on board MH-17: 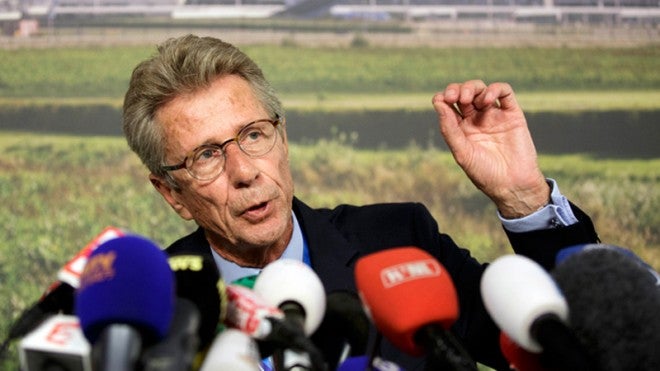 Huib Gorter, senior vice-president of Malaysia Airlines, speaks at a press conference at Schiphol airport in Amsterdam, Thursday, July 17, 2014. An official with Malaysia Airlines says at least one Canadian was among the 295 people aboard a passenger plane that was downed today over Ukraine. Gorter says 154 people were Dutch, 27 were Australians, 23 were Malaysians, 11 were Indonesian, 6 were from the United Kingdom, 4 were from Germany, 4 were from Belgium, and 3 were from the Philippines. Gorter says authorities are still trying to determine the nationalities of the rest of the passengers. (AP Photo/Phil Nijhuis)

Read Next
PAL assures passengers it does not fly over Ukrainian airspace
EDITORS' PICK
Over 3 Million worth of prizes to be won at Smart Padala’s SENDali Manalo Promo!
Gear up and get ready to play with Yamaha Mio Gear
DOH: 28,471 new COVID-19 cases in PH; active cases now 284,458
Acer starts the year off strong with the Aspire Vero National Geographic Edition
On Day 2 of implementation, gov’t says workers now exempt from ‘no vax, no ride’ policy
Metro Manila posts lowest temperature yet this ‘amihan’ season at 19°C
MOST READ
In Batanes, octogenarian dies of COVID-19
Cold-case investigation names surprise suspect in Anne Frank’s betrayal
Emma Stone calls Andrew Garfield a ‘jerk’ after he ‘lied’ about his ‘Spider-Man: No Way Home’ appearance
Czech anti-vax singer dies after deliberate infection
Don't miss out on the latest news and information.