“That was supposed to be delivered for school children starting August of 2013. We are observing nutrition month now and yet the milk has not arrived,” Natividad told the Philippine Daily Inquirer.

Dr. Mary Ruth Yanga, Medical Officer IV of the Department of Education’s Health and Nutrition Section, said the milk feeding program was implemented this month but only for four days.

The INQUIRER learned that the program was launched in the villages of Ayala and Tulungatung on July 1.

“The feeding lasted only for four days when it was supposed to be more than a hundred days,” Yanga said.

The National Dairy Authority (NDA), an agency attached to the Department of Agriculture (DA), was to implement the P10-million school-based milk feeding program last year. 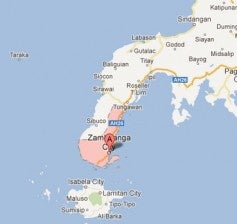 The program’s target beneficiaries are 5,208 Kindergarten and Grade 1 pupils, who are to be provided with 200 milliliter chocolate milk five days a week for 120 days.

Natividad said the last time he met with NDA representatives, one of whom he identified as Noel Caranza, was before the Zamboanga siege in September 2013.

“I don’t know where this Caranza is now, not even a word from the NDA or from its partner agency here. I guess they pulled out the support due to the peace and order situation or they were afraid because of the siege last year,” Natividad said of the attack staged by a faction of the Moro National Liberation Front loyal to Nur Misuari and the ensuing military operations mounted to flush out the rebels.

Salazar told the INQUIRER that she requested for a milk feeding program during her term as congressional representative for the city’s first district. She became mayor in 2013.

Salazar said the program did not push through because the funding came from DAP. The Supreme Court declared DAP unconstitutional just two weeks ago, almost a year after the milk feeding program was supposed to have been implemented.

A source who asked not to be named as she has not been authorized to speak on the matter, said almost all members of Congress “took advantage” of the NDA’s milk feeding program.

The source said lawmakers were told to write the NDA “so they can access the P10 million feeding program for school children.”