“Typhoon Glenda is expected to cross Metro Manila early this morning and exit landmass via Zambales by noon today,” the Philippine Atmospheric Geophysical and Astronomical Services Administration said in an advisory at 4:15 a.m. 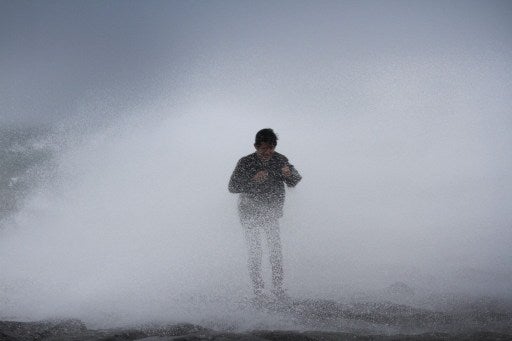 A resident stands near waves in Legazpi City, southeast of Manila, on Tuesday, July 15, 2014, as authorities warned of approaching Typhoon Glenda (Rammasun). Glenda sped up while maintaining its strength early Wednesday, and thus may leave the Philippine landmass sooner than expected.
AFP PHOTO/Charism Sayat

The typhoon now moved at 26 kilometers per hour west northwest from the previous 19 kph. It packed maximum sustained winds of 150 kph near the center and gusts of up to 185 kph.

Under Signal No. 3, travel by land, sea and air is dangerous. This may also cause heavy damage to agriculture. There is also moderate to heavy disruption of electrical power and communication services.

Areas under storm signals were also warned of possible flashfloods and landslides.

Storm surges of up to 3 meters is also possible in coastal areas under Signal Nos. 2 and 3.

The Department of Public Works and Highways (DPWH) said it had alerted all of its district and engineering offices to “respond to any eventualities” as Glenda blew into the country.

The Manila Electric Co. (Meralco) and the National Grid Corp. of the Philippines (NGCP) said all monitoring systems were up and personnel were ready to respond to emergencies as the typhoon crossed the capital.

Meralco spokesnan Joe Zaldarriaga urged the public to keep all channels of communication open and ready, including devices for charging cell phones, laptops, radios and other gadgets.

The NGCP said it was monitoring transmission lines in Glenda’s path. With personnel and equipment ready, the company said restoration work would be immediate where this would be required.

Glenda slammed into Albay past 5 p.m. Tuesday as thousands of people sought shelter in evacuation centers.

As early as 24 hours before Glenda hit land, thousands of families in coastal and other low-lying areas had been evacuated to safer grounds, a preemptive measure organized by the provincial government.

Similar preemptive evacuations were also carried out in the provinces of Camarines Sur, Camarines Norte, Sorsogon, Masbate and Catanduanes.

While gusty winds in Catanduanes reached more than 100 kph at 3:30 p.m. Tuesday, Lourdes Fadrigole, with her family of six, felt safe at the provincial capitol lobby.

They had been there since 10 a.m., arriving with around 60 other families as the local government evacuated coastal villages as a safety measure for the coming of Glenda.

Fadrigole’s husband stayed behind to watch over their seaside home in Rawis village.

She brought a mattress for  her children, including her 2-month-old baby, to lie on.

Another evacuee, Jose Toquero, said he and his wife decided to leave their house in Concepcion as they feared a storm surge.

But unlike Fadrigole and Toquero, the few who went to evacuation shelters, most people stayed in their homes.

Bicol police also said three men were listed as missing off Catanduanes on Tuesday, a day after they pushed out to sea to fish and failed to return.

From 841 on Monday afternoon, the number of ship passengers stranded in various ports in Luzon and the Visayas stood at 6,824 on Tuesday afternoon

At least 73 domestic and international flights were canceled on Tuesday as Glenda threatened Luzon.

The Philippine National Police readied disaster response as the typhoon bore down on the country’s eastern seaboard.

Power lines were down in many parts of Albay and the Camarines provinces and were completely cut off in Catanduanes and Sorsogon, according to data gathered from the website of the Office of Civil Defense-Regional Disaster  Risk Reduction and Management Council (OCD-RDRRMC) in Bicol.

There was no power in the entire province as tree branches fell and roofs, leaves, twigs and other debris were seen littering the streets.

The PDRRMC said it could take time for the electric company to clear the lines.

Relief  had been distributed to evacuation centers, but the evacuees also brought their own food and kitchen utensils.

In Albay, the provincial government had planned to evacuate 45,000 families, but that number was surpassed after Pagasa announced that Glenda would hit the province and neighboring Sorsogon between 6 and 8 p.m.

Not crowded this time

But unlike in the past, evacuation centers in elementary and high schools were not crowded.

At Albay Central School in Legazpi City where 12 rooms with a capacity of 15 families for each room were reserved for  evacuees, only 51 families from Barangays 15, 16 and 17 evacuated.

Norma Abion, 56 of Barangay 16 whose family left their house, said they were safe at the evacuation center, unlike during  Typhoon “Reming” (international name: Durian) in 2006 when floodwaters reached 3 meters.

“After eight years when we experienced intense devastation, we just have to be extra careful,” she said in an interview.

Glenda struck on the eve of the town fiesta in Magallanes, Sorsogon, and residents were reluctant to leave their homes despite the threat of  storm surge.

The residents, some employed in municipal government offices, proceeded to cook fiesta food unmindful of the pouring rain.

“The residents were insisting that they were safe in their homes. But for those who left their homes, evacuation started at 1 p.m.,” said Ruben Conda, action officer of the Municipal Disaster Risk Reduction Management Council.

The Department of Social Welfare and Development  (DSWD) said it had prepositioned enough relief stocks in the areas  expected to be hit by Glenda.

In the Bicol region, the DSWD field office had readied 2,244 family food packs, 189,764 assorted food items and 55, 224 assorted nonfood items to be distributed to local governments.

The DSWD added that an additional 150 sacks of rice had been reserved for Catanduanes.

In Tacloban City, 290 families still living in tents after Yolanda were evacuated to safer grounds.

The DSWD said it would augment the city government’s resources with 500 food packs, 500 blankets and 2,500 pieces of bottled water.

The field office in the Visayas has 7,528 food packs and 22,500 rice packs and a standby P1-million standby fund, the DSWD said.

Gerard Paragas of the Tacloban City Disaster and Risk Reduction Management said 157 families living in tents in two villages in San Jose district were evacuated to the astrodome on Tuesday morning.

Latest figures provided by the local government put the number of evacuees at 526 families, or 2,169 people.

A barge ran aground in Hindang village, Leyte province, due to big waves generated by Glenda. All members of the crew were reported safe.

In Cebu province, Gov. Hilario Davide III ordered the suspension of classes at all levels on Tuesday morning and a fishing boat docked at Medellin town capsized. No one was hurt.