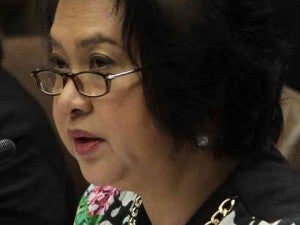 Interviewed after his hearing for bail from his plunder charges, Estrada said Tan should have also conducted an audit on the DAP, a savings-impounding mechanism to pump-prime the economy crafted by Budget Secretary Butch Abad.

Estrada said he had interpollated Tan in the Senate and found out COA received DAP funds and spent it for cars.

“In my opinion, Tan should also be held accountable because DAP has been in existence since 2011. COA should have conducted an audit on the DAP,” Estrada said in a mix of English and Filipino.
“When I was interpollating Tan… I asked her how was the DAP spent. She said it was spent to purchase cars. That is not pump-priming the economy,” he added.

Estrada, who faces plunder and graft charges over the pork barrel scam, first blew the lid on the president’s purported pork barrel funds when he said funds from DAP were given as incentive to senators who voted to convict chief justice Renato Corona.

President Benigno Aquino on Monday defended the DAP in a televised speech, warning the Supreme Court of a clash with the executive when it ruled that parts of DAP were unconstitutional.