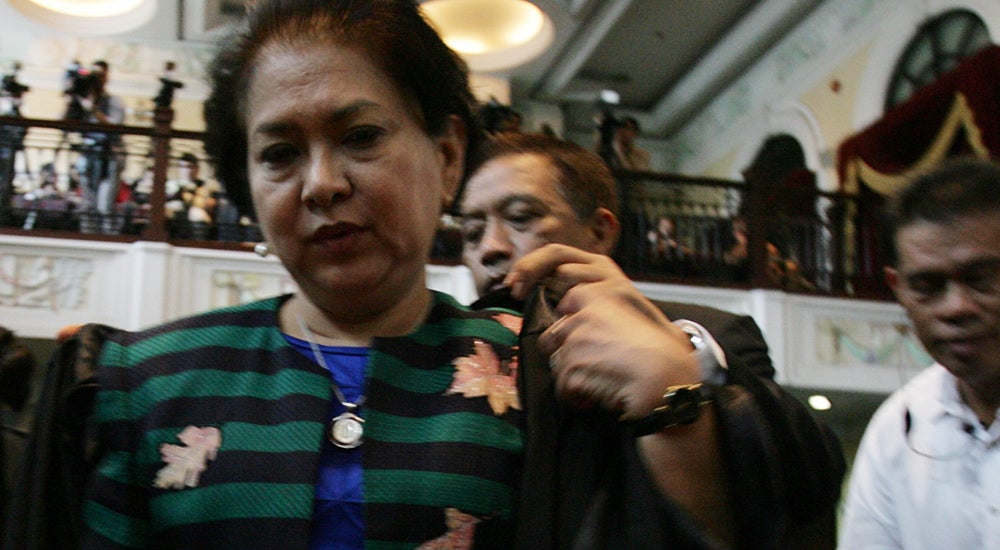 Tan made the disclosure as the Senate allowed the COA chief to directly answer the questions posed by Sen. Jinggoy Estrada during the late-night deliberations on the agency’s P7.97-billion share in the P2.26-trillion national budget for 2014.

It was the second time Estrada grilled Tan during the budget deliberations—the first was during one of the hearings of the Senate committee on finance—as the COA’s special audit on the Priority Development Assistance Fund (PDAF), or pork barrel, pointed to the opposition senator as one of the lawmakers whose fund entitlements went to dubious nongovernment organizations (NGOs).

The DAP came to light after Estrada disclosed in a privilege speech that senator-judges, who convicted Chief Justice Renato Corona in May 2012 at his impeachment trial, received P50 million each in lump-sum allocations.

Estrada, who was subsequently charged with plunder in the Office of the Ombudsman for allegedly pocketing huge amounts of his PDAF, insinuated that Malacañang had offered the additional allocations as an incentive to convict Corona.

Abad later explained that the additional lump-sum allocations came from the previously unknown DAP, a mechanism that impounds unused funds of agencies, to help pump-prime the economy. It turned out that a few senators got P100 million from the DAP.

“It appears one of the quick-moving projects referred to by [Budget] Secretary [Florencio] Abad is the purchase of cars. Is that correct? Is my interpretation correct?” Estrada asked Tan.

Tan, a lawyer, kept from making any comment as the DAP’s constitutionality was pending in the Supreme Court.

“Sir, I think the rationale for the DAP is precisely at issue in the Supreme Court. So I would like to decline to comment on that,” Tan said.

Several groups have questioned the constitutionality of the DAP and the PDAF in the high court. The tribunal ruled on Nov. 19 that the PDAF was unconstitutional. It has yet to rule on the DAP.

Officials that were given cars bought with DAP funds were Commissioner Heidi Mendoza and two COA directors, Estrada told reporters in an ambush interview on Tuesday.

Tan said the purchase of her own service vehicle was funded by the COA’s budget, not by the government’s realigned savings from the DAP.

The COA chair indicated that the balance of more than P60 million from the DAP would be used to improve the commission’s IT capabilities. “So this is where we are focusing now because this is what we really need,” Tan said.

“I requested the DBM [for funds] because when I got into COA, we found out that we were behind in terms of computerization,” Tan said when Estrada asked who had requested the executive branch for additional funds.

“Our computers are the type which still used floppy disks and so we needed to modernize in order to carry out our work efficiently and well. We found out the great backlog, so we wanted to hire some consultants. So I did request that,” Tan added.

She said she requested the funds in 2011. “I don’t think there was already a DAP at that time,” Tan said.

“If you ask my opinion madame chair, your agency, COA, cannot be objective in its audit on the propriety and legality of the DAP when the agency itself is a recipient and beneficiary of the DAP even if there is no irregularity in the disbursement of the DAP, and everything was in accordance with the Saro (special allotment release order) issued by the DBM,” Estrada said.

Tan said the COA wasn’t in the business of determining the legality of the DAP.

Estrada to COA chief:  Why us? Why not blame the implementing agencies?

Read Next
Scotland sets out blueprint for independence
EDITORS' PICK
Google won’t accept election ads for 2022 national polls
Smart offers wireless fiber-like speeds to Filipino homes with country’s first 5G Prepaid Home WiFi
Legarda: Ending Violence Against Women, a cause for all
EJ Obiena’s coach rebuffs Patafa ‘witch hunt,’ says he never complained about pay
Jonel Nuezca, convicted ex-cop, collapses and dies at Bilibid
This new condo in the South will make you want to turn a new leaf
MOST READ
Bongbong Marcos to face another disqualification case
Jonel Nuezca, convicted ex-cop, collapses and dies at Bilibid
Palace: Malls, establishments may require customers to use of face shields
Carlos vows to let PNP personnel spend time with family during holidays, work near their home
Don't miss out on the latest news and information.