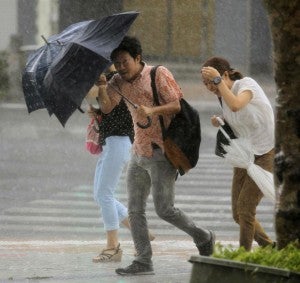 People hold umbrellas through heavy rain caused by a typhoon in Naha, Okinawa, Wednesday, July 9, 2014. A powerful storm slammed through the southwestern Japanese island of Okinawa, leaving at least 28 people injured and 63,000 homes without power before swerving toward the bigger island of Kyushu on Wednesday. AP/Kyodo News

TOKYO — Typhoon “Neoguri” slammed into the Japanese mainland Thursday bringing widespread flooding, ripping trees from their roots and leaving houses half-buried under mud, as tens of thousands were urged to seek shelter.

The storm, which has left several people dead and a string of damage in its wake, caused havoc in many small communities as residents struggled to keep waves of dirty water from destroying their homes.

More than 500 houses in several prefectures were flooded due to the typhoon and heavy rain, according to public broadcaster NHK, with about 130,000 households urged to seek shelter.

“Water kept gushing into the house no matter how hard we tried to pour it out. We kept shoving out water all night,” said a woman in northern Yamagata Prefecture, where humid air brought by the typhoon caused huge downpours.

Officials warned over the risk of flooding and landslides as powerful winds and torrential rain batter the archipelago nation, with local authorities urging half a million people to seek shelter in Okinawa earlier in the week.

Neoguri hit the mainland Thursday morning near Akune City on the southern main island of Kyushu, which is home to 13 million people and lies next to the country’s biggest island of Honshu where major cities including Tokyo and Osaka are located.

The typhoon had crossed Kyushu by late morning and was forecast to make a landfall on Honshu by Friday.

The storm’s ferocity slowed somewhat overnight, now packing gusts of up to 126 kilometers (80 miles) per hour as it moved east at 25 kilometers per hour.

Nearly 50 people have been injured in the wake of the storm, officials and reports said, while as many as five deaths have been directly or indirectly linked to the typhoon.

More than 190 flights were cancelled while the government was expected to hold a disaster-management meeting over how to protect against the force of nature.

The typhoon is likely to reach areas near the tsunami-crippled Fukushima nuclear power plant by Friday morning. The site’s operator said workers were bracing for the storm.

“We are tying up cables and hoses… and making sure cranes and booms don’t fall,” a company spokesman said.

“We will also beef up patrols in areas where water could flow in,” he said.

The storm’s massive downpours present an extra headache for the plant where workers are locked in a daily struggle to contain huge amounts of contaminated water, used to keep the destroyed reactors cool, as well as tainted groundwater leaking into the sea.

The plant’s operator is currently building an “ice wall” — freezing the ground around the plant — to solve the groundwater problem, more than three years after the worst atomic crisis in a generation.

Rivers and creeks were flooded in Honshu, with a mudslide swallowing a house and killing a 12-year-old boy who was inside.

The giant wave of muddy water was caught on a dramatic government video played repeatedly during round-the-clock news coverage.

“Upon receiving an emergency call on a mudslide in Nagiso Town, police and paramedics rushed there,” late Wednesday, a local police official said.

“They pulled a mother and her three children out of mud and rubble… but a boy, 12, was confirmed dead at hospital,” he said.

A middle-aged man in the town told public broadcaster NHK that he went out to see a river in the neighborhood late Wednesday as he heard what sounded like “an earthquake.”

“I saw rocks nearly two meters (six-foot) big rolling down… I cringed at the sight as it was the first time I’ve seen something like that,” he said.

By Thursday morning, police and municipal officials said two elderly men were found dead in irrigation ditches in the northeastern and southwestern part of the country.

A 62-year-old man knocked off his boat in rough waters in southwestern Kochi Prefecture, while NHK said an 81-year-old fisherman died in Kumamoto prefecture on Kyushu.