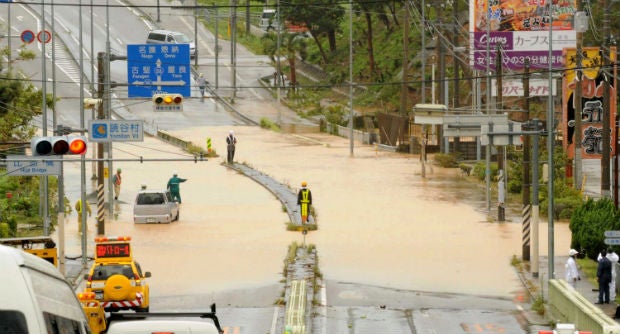 “It landed near Akune City shortly before 7 a.m. (2200 GMT Wednesday),” an official at the Japan Meteorological Agency said.

Akune sits on the western coast of Japan’s southern main island of Kyushu.

The typhoon’s winds slowed somewhat overnight, with the storm packing gusts of up to 126 kilometers (78 miles) per hour as it moved east at 25 kilometers per hour.

The system is forecast to move further along the Japanese archipelago later in the week after crossing Kyushu.

The government was set to hold a disaster-management meeting Thursday morning to discuss how to best cope with the storm.

Officials said Neoguri would bring torrential rain and warned of the risk of flooding and landslides, after the storm forced local authorities to advise half a million people to seek shelter in Okinawa earlier in the week.

As the typhoon was bearing down on the archipelago, round-the-clock television footage pinpointed its latest location and helmet-clad reporters surveyed the damage left by the powerful storm.

Areas outside the typhoon’s immediate path were also lashed with heavy rain, with a landslide in Nagano prefecture on Japan’s biggest land mass of Honshu swallowing a house and killing a 12-year-old boy who was inside, according to national broadcaster NHK.

On Tuesday, the storm claimed the life of a 62-year-old man knocked off his boat in rough waters in southwestern Kochi Prefecture, according to authorities, while NHK said an 81-year-old fisherman died in Kuammoto prefecture on Kyushu.

Read Next
PH buffer stock of rice dwindling
EDITORS' PICK
Authors unbowed after gov’t ‘purge’ of books
Powered by style, innovation and passion
‘FPJ’s Ang Probinsyano’ officially ends after nearly 7 years
House energy committee chair Arroyo bats for cheap electricity
A laptop that maximizes your WiFi so you can maximize your productivity
Red-tagged green activist recalls imprisonment
MOST READ
Arjo Atayde reveals proposal to Maine Mendoza was ‘more than a year’ in the making
Man, girlfriend found dead in Leyte river
Jalen Green has no doubt Kai Sotto will make the NBA
Authors unbowed after gov’t ‘purge’ of books
Don't miss out on the latest news and information.