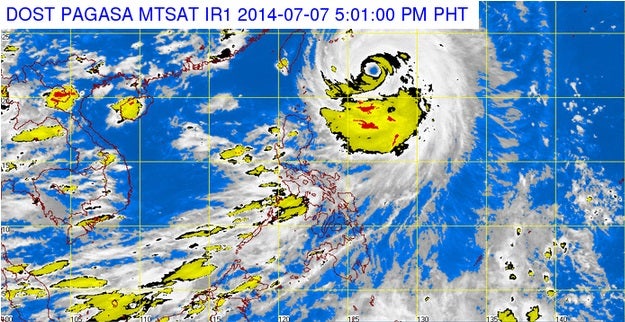 TOKYO — Japan’s weather agency on Monday issued its highest alert as Super Typhoon “Neoguri” barreled toward the southern Okinawa island chain, warning of violent winds and towering waves from what could be one of the worst storms in decades.

The typhoon warning — the first since a new system began last August — means that the storm poses a threat to life and could inflict massive damage from gusts up to 270 kilometers (160 miles) per hour and torrential rain.

Waves could reach as high as 14 meters (45 feet), the Japan Meteorological Agency said in a warning that was likely to stoke memories of Japan’s quake-tsunami disaster in 2011.

The alert was aimed at Miyako-jima in the center of the archipelago, with the massive storm expected to hit more populated areas of Okinawa on Tuesday.

“Please stay alert against violent winds and high waves,” the weather agency said in a brief statement that accompanied the emergency warning.

Earlier, officials warned residents in the area to stay indoors, while the biggest US Air Force base in the Pacific evacuated some of its aircraft.

The typhoon was located some 600 kilometers (370 miles) south of Okinawa’s main island at 0600 GMT and was moving north northwest at 25 kilometres (16 miles) per hour.

“Please be vigilant, stay inside buildings and avoid working outside and making unnecessary trips,” a meteorological agency official said at a press briefing.

The official warned that the storm could pack “record level” winds and stir up high waves.

“It is likely to arrive in Okinawa Tuesday morning, generating violent gales and high waves… and, in some areas, violent rains,” he said.

“Please be ready to evacuate.” 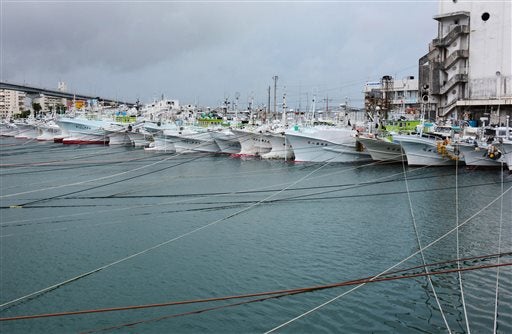 The meteorological agency forecast Neoguri — whose name means “racoon” in Korean — would dump up to 80 millimeters (three inches) of rain an hour on Okinawa as it pounds the archipelago.

The storm, which could affect an area with a 500 kilometer radius, was expected to be downgraded by the time it hit the Japanese mainland.

However, Kyushu region — next to the main island of Honshu where major cities including Tokyo and Osaka are located — was already seeing heavy rains and officials warned of possible floods and landslides.

The US Kadena Air Force base in Okinawa, the largest US airbase in the Pacific, began evacuating some of its aircraft Sunday in preparation for the typhoon.

“So be prepared!” Hecker said. “Tie down your outdoor items and work with your neighbors to help them.”

He added: “During the typhoon, do not go outside… Anything not tied down, even small items, could become deadly projectiles.”

Okinawa is regularly hit by typhoons but islanders were taking no chances, with fishermen on Miyako island bringing boats back to port and tying them down with ropes.

“It’s rare that we brace for a typhoon (as early as) July,” a Miyako fisherman said in television footage from public broadcaster NHK.