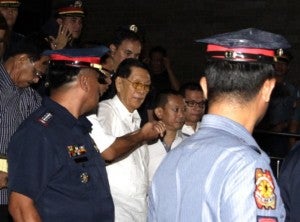 MANILA, Philippines — Senator Juan Ponce Enrile on Monday filed a motion for hospital arrest amid the plunder rap he faces in connection with the pork barrel scam.

In his motion, Enrile said he wanted to be detained at the Philippine National Police General Hospital.

“Enrile prays that, considering his advanced age and frail condition, as shown in the medical certificates attached to the motion for bail, he be placed, in the meantime, under hospital detention…” the motion read.

According to his motion for bail, which was later junked by the court, Enrile has the following illnesses: Diabetes mellitus, dyslipidemia, chronic hypertension, extensive coronary artery calcification in the right coronary, age-related macular degeneration, elevated blood fasting sugar, mild anemia, and eight other diseases.

Also, according to a medical certificate from the Makati Medical Center and attached to the bail motion, Enrile is also under 22 maintenance medicines for his illnesses: 21 tablets and an injection.

The veteran senator is then asking that the court also allow him access to other medical facilities “in case of emergency of necessity” and under security by the guards.

“[The] PNP General Hospital may not have the necessary specialists or resources to fully address Enrile’s elderly needs and poor medical condition, and the complete specialized equipment and facilities for the delicate treatments requires for his particular ailments…” the motion read.

Enrile was ordered arrested by the Sandiganbayan after it found probable cause to hold the 90-year-old senator on trial.