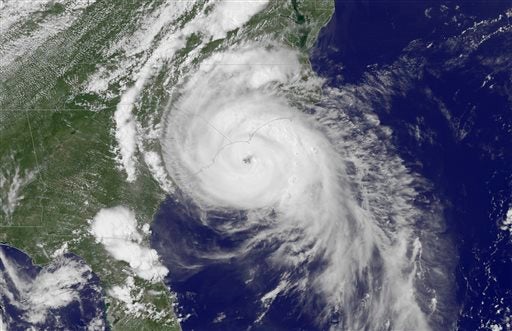 This Thursday, July 3, 2014, satellite image taken at 3:45 p.m. EDT and released by the National Oceanic and Atmospheric Administration (NOAA), shows Hurricane Arthur near the coasts of South Carolina and North Carolina. AP

KILL DEVIL HILLS, North Carolina — Proving far less damaging than feared, Hurricane Arthur left tens of thousands of people without power Friday in a swipe at North Carolina’s dangerously exposed Outer Banks, then brought lousy Fourth of July beach weather to the Northeast as it veered out to sea.

The weather along the narrow barrier islands — whose beaches draw hundreds of thousands of tourists every summer — had already cleared by Friday afternoon as Arthur scooted north and its outer bands scraped the Delaware and New Jersey shores. Forecasters predicted the storm would weaken before its center moves over western Nova Scotia in Canada early Saturday.

While state and local officials worked to restore access to Hatteras Island and help those who had suffered storm and flooding damage, the effects of the hurricane were mostly confined to that part of the state. Farther south, the beaches were once again packed with people soaking up the sun.

Arthur struck North Carolina as a Category 2 storm with winds of 100 mph (160 kph) late Thursday, taking about five hours to move across the far eastern part of the state.

About 40,000 people lost power, and the rush of water from the ocean on one side and the sound on the other side buckled part of North Carolina Highway 12 in a spot on Hatteras Island that was breached in Hurricane Irene in 2011. Dozens of workers were heading to fix the highway, and the Department of Transportation said it was confident the road would reopen Saturday as long as an underwater sonar test of a key bridge showed no problems.

No injuries or deaths were reported. After praising emergency officials and saying the state dodged a bullet, Gov. McCrory noted that all of North Carolina’s beaches were open outside of the Outer Banks and encouraged residents and visitors to enjoy the holiday. He was heading to the beach himself for an Independence Day parade in Southport, a welcome surprise when he expected to be stuck in Raleigh monitoring the storm all day.

“The North Carolina beaches are open for business and they’re open for tourists,” McCrory said. “The umbrellas are going up as we speak right now.”

By 11 a.m. Friday, Arthur had weakened to a Category 1 hurricane with maximum sustained winds around 90 mph (145 kph), and additional weakening is expected, the U.S. National Hurricane Center said. The center was about 100 miles (160 kilometers) east-southeast of Ocean City, Maryland, and the storm was moving northeast near 24 mph (40 kph).

While the Northeast wasn’t expected to take a direct hit, the rain from Arthur’s outer bands was disrupting the holiday. Fireworks displays in New Jersey and Maine were postponed until later in the weekend. Tropical storm warnings were in effect for coastal areas as far north as Cape Cod, Massachusetts. Tropical storm watches and warnings were in effect for Nova Scotia and New Brunswick in southeastern Canada.

Still, the first hurricane known to strike the U.S. on July 4 caused some frayed nerves on North Carolina’s Outer Banks — a 200-mile (320 kilometer) string of narrow barrier islands with about 57,000 permanent residents and around 250,000 visitors on most summer weekends. A mandatory evacuation was issued for the southern Outer Banks.

Hurricane Arthur forms in Atlantic off US East Coast

Hurricane Arthur forms in the Atlantic