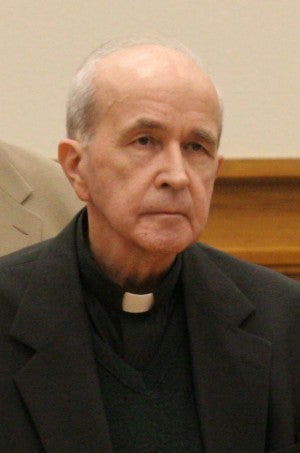 In this Thursday, May 11, 2006 photo, in Toledo, Ohio, the Rev. Gerald Robinson, a Roman Catholic priest, listens as the verdict is read finding him guilty of killing Sister Margaret Ann Pahl. AP

COLUMBUS, Ohio — A Catholic priest convicted of killing a nun inside a chapel a day before Easter 1980 died Friday at a Columbus prison hospice unit, a day after a federal judge refused his request to be released to family care so he could die in his hometown of Toledo.

Robinson had been serving a sentence of 15 years to life. He was arrested 24 years after the nun’s death and was found guilty in 2006 of stabbing and strangling Sister Margaret Ann Pahl at a Toledo hospital where they both worked.

Church historians have said it’s the only documented case of a Catholic priest killing a nun.

Robinson and Pahl had worked closely together at the hospital where he was a chaplain and she was caretaker of the chapel. He presided at the funeral Mass for her.

The 71-year-old nun was killed while she was preparing the chapel for Easter services in 1980. She was choked and then stabbed 31 times.

Robinson emerged as a suspect when police found a sword-shaped letter opener in his desk drawer two weeks after the killing. He also admitted lying to police, making up a story that someone else confessed to the murder. Yet he was not charged and remained a priest. A year after the killing, he was transferred out of the hospital.

Robinson developed a faithful following in his hometown of Toledo, where he delivered sermons and heard confessions in Polish. He ministered to the sick and dying at nursing homes and hospitals after retiring from three Roman Catholic parishes.

Police arrested him in 2004 after investigators reopened the murder case when a letter surfaced that accused Robinson and other priests of molestation. Police weren’t able to substantiate the allegations of sexual abuse, but it led them back to the nun’s murder.

Investigators said blood stains on an altar cloth seemed to match the patterns of the letter opener found in Robinson’s apartment. New technology not available in 1980 allowed them to connect the killing with the letter opener.

Prosecutors said Robinson tried to humiliate Pahl in her death, her stab wounds formed an upside down cross and a smudge of blood on her forehead meant as a mock anointing.

They blamed the murder on Robinson’s simmering anger over Pahl’s domineering ways, saying their relationship was strained and that Pahl was upset over the shortening of Good Friday services a day before she was killed.

Robinson, who wore his priest’s collar throughout his trial, maintained his innocence while losing several attempts to overturn his conviction.

A new defense team argued that a now-deceased serial killer could have been the one who stabbed and strangled Pahl. Prosecutors dismissed the theory, saying investigators and even the priest’s original attorneys didn’t think there was a connection.

Robinson remained a priest after he was convicted, but he was barred from ministry. He told The Columbus Dispatch in an interview three years after the trial that he was stunned by testimony linking him to the murder.

He also said other prisoners called him “Father” and would tell him their sins.

Court won’t free convicted US priest to die at home