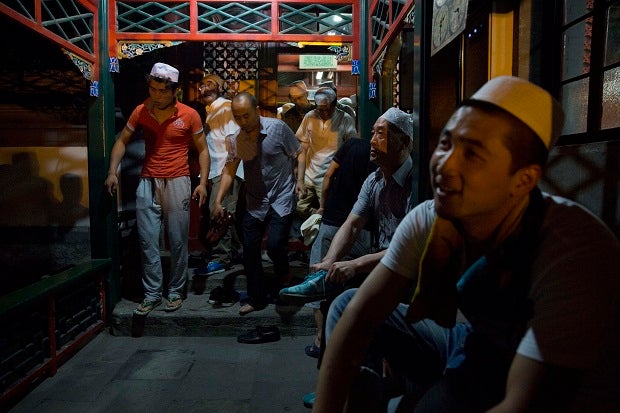 Chinese Muslim men leave after attending a prayer session to mark the start of Ramadan at the Niujie mosque, the oldest and largest mosque in Beijing, China, Saturday, June 28, 2014. Muslims throughout the world start observing the holy month of Ramadan, when the observant refrain from eating, drinking, smoking and sex from dawn to dusk. AP

China’s ruling Communist party is officially atheist, and for years has restricted fasting in Xinjiang, home to the mostly Muslim Uighur minority.

Rights groups blame tensions on religious and cultural restrictions placed on Uighurs and other Muslim minorities in the vast area, which abuts Central Asia.

Several government departments posted notices on their websites in recent days banning fasting during Ramadan, which began this weekend. During the holy month, the faithful fast from dawn to dusk and strive to be more pious.

The commercial affairs bureau of Turfan City said on its website Monday that “civil servants and students cannot take part in fasting and other religious activities.”

The state-run Bozhou Radio and TV university said on its website that it would “enforce the ban on party members, teachers, and young people from taking part in Ramadan activities.”

“We remind everyone that they are not permitted to observe a Ramadan fast,” it added.

A weather bureau in Qaraqash county in western Xinjiang said on its website that “in accordance with instructions from higher authorities,” it “calls on all current and retired staff not to fast during Ramadan.”

A state office which manages the Tarim River basin posted pictures of its staff wearing traditional Uighur “doppa” caps tucking into a group meal on Saturday.

“Although the meal coincided with the Muslim festival of Ramadan, the cadres who took part expressed a positive attitude and will lead the non-fasting,” it said.

China has in the past said that restrictions on fasting are meant to ensure the health of government employees.

Dilxat Raxit, a spokesman for the exiled World Uyghur Congress, cited local sources as saying that authorities encouraged Uighurs to eat free meals on Monday, and inspected homes to check if the fast was being observed.

“China taking these kind of coercive measures, restricting the faith of Uighurs, will create more conflict,” he said.

“We call on China to ensure religious freedom for Uighurs and stop political repression of Ramadan.”