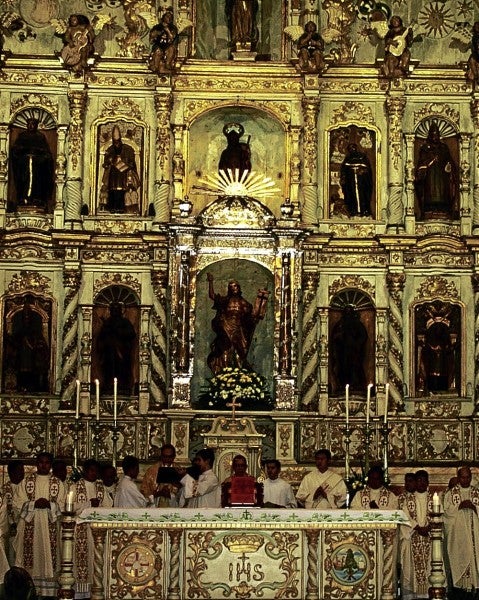 GUAGUA, Pampanga, Philippines — Two stolen antique ivory images of the Virgen de la Correa and her Child Jesus were recovered by the Caloocan City police and the Guagua police in separate operations this week.

The twin images were reported missing on June 30.

Based on the confession of Quintos, Esteban said, Guagua policemen tracked down the head, hands and accessories of the Virgen de la Correa to a house in Barangay (village) San Basilio in nearby Sta. Rita town, Pampanga province.

The thief had abandoned the image’s body at the side altar of the church.

Fr. Reynaldo de la Cruz, head of the St. James the Apostle Parish in the old district of Betis, took custody of the images, which would serve as  evidence against Quintos, who will be presented to the provincial prosecutor on Wednesday for preliminary investigation on a charge of theft.

The suspect, who is currently locked up at the municipal jail, refused to talk to reporters.

The images have been in the 1790 inventory of properties owned by the Betis church, which the government declared a National Cultural Treasure in 2009 due to its elaborate illustrations of Bible stories on ceilings and walls as well as its and architectural features.

Records show that Quintos had escaped twice from the Pampanga provincial jail, the last time on June 8, according to Edwin Mangaliman, provincial warden.

The suspect had falsely identified himself to the authorities as Niño Quintana, Mangaliman said.

Torres said he discovered Quintos’ identity when he found a document marked with the letter head, “Pampanga provincial jail,” in the suspect’s bag.

Esteban said the police in Caloocan City arrested Quintos in Monumento as he tried to sell the Child Jesus image. His accomplice, identified only as “Saddam,” remains at large.

Asked if Quintos had accomplices among church workers or parishioners, Esteban said this was still under investigation.

Because this was the second time that the Child Jesus image was recovered, Pampanga Governor Lilia Pineda said: “It looks like the Child Jesus did not want to leave Betis. [The recovery] strengthened my belief that the image is miraculous.”

The Child Jesus image was first stolen before a procession on Dec.30, 2013. The head, hands and feet were recovered by ecclessiastical art restorer Thomas Joven a week later. He reconstructed the body.

Bishop Pablo Virgilio David, director of the Archdiocese of San Fernando’s church heritage commission, said the two incidents justified a decision to entrust the church treasures of Betis to the archdiocesan museum, which is tightly secured in the University of the Assumption in the Pampanga capital of San Fernando.

De la Cruz said he has yet to consult with the parishioners.