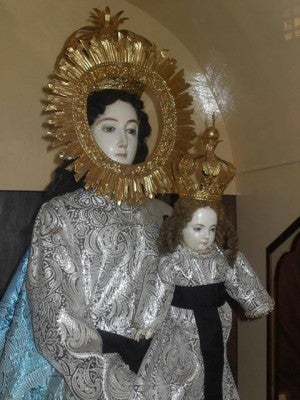 GUAGUA, Philippines—Two ivory images included in the 1790 inventory of the St. James the Apostle Church in the old district of Betis in Guagua town, Pampanga province, were stolen either on Sunday night or early Monday morning, the town’s parish priest told the Philippine Daily Inquirer on Monday.

Fr. Reynaldo de la Cruz said this was the second incident of theft at the Betis church, a National Cultural Treasure shrine, since 2013.

De la Cruz said his two assistants and the church’s security guard discovered that the head and hands of the image of the Virgen de la Correa and the whole image of the Child Jesus were missing at 4:30 a.m. as they prepared for the 6 a.m. Mass.

This was the first time that parts of the antique image of the Virgin Mary were stolen, De la Cruz said.

The accompanying image of the Child Jesus was stolen before a procession on Dec. 30, 2013. Ecclesiastical art restorer Thomas Joven recovered the head, hands and feet of the Child Jesus by paying P167,000 to an emissary of the thief.

The Parish Pastoral Council (PPC) reimbursed the P167,000 but Joven returned the money to add to funds to improve the security measures around the church founded by Augustinians in 1572.

“We were not remiss in securing the images. It looked like the thief or thieves managed to stay inside the church when we closed it after the evening Mass [on Sunday],” De la Cruz said.

The padlock of the side door facing the national road was destroyed from inside the church, he said. The images stood beside the main altar.

De la Cruz said closed circuit television cameras have not been installed in the church.

His two assistants, De la Cruz said, were taken for questioning by the Guagua police.

Mayor Dante Torres said he directed local policemen to help in the search. As of 2 p.m. on Monday, the police had yet to find the items or identify any suspect.

Pampanga Gov. Lilia Pineda said she would offer a reward for information leading to the recovery of the items and identification of the suspects. Pineda did not give the amount of the reward money, saying she needed to consult with the police and heritage advocates in the province.

Bishop Pablo Virgilio David, director of the Archdiocese of San Fernando’s church heritage commission, said he had tried to persuade the Betis PPC and its heritage committee to commission a replica of the image and entrust the safekeeping of the original to the archdiocesan museum after the recovery of the image of the Child Jesus early this year.

“They refused, of course, and assured us that they could secure it themselves. Perhaps now our archdiocesan commission need not persuade them anymore about the safekeeping of the other heritage pieces that remain in the Betis church,” David told the Inquirer.

The museum, began in the time of then San Fernando Archbishop Oscar Cruz in the 1980s, is housed at the University of the Assumption.

The two images, which used to be in the care of the Pecson family in Guagua, were taken to the church by a local priest several years ago.

Last year, several bells in chapels in Guagua and nearby Bacolor town were stolen. The police and residents have failed to recover them and identify suspects.