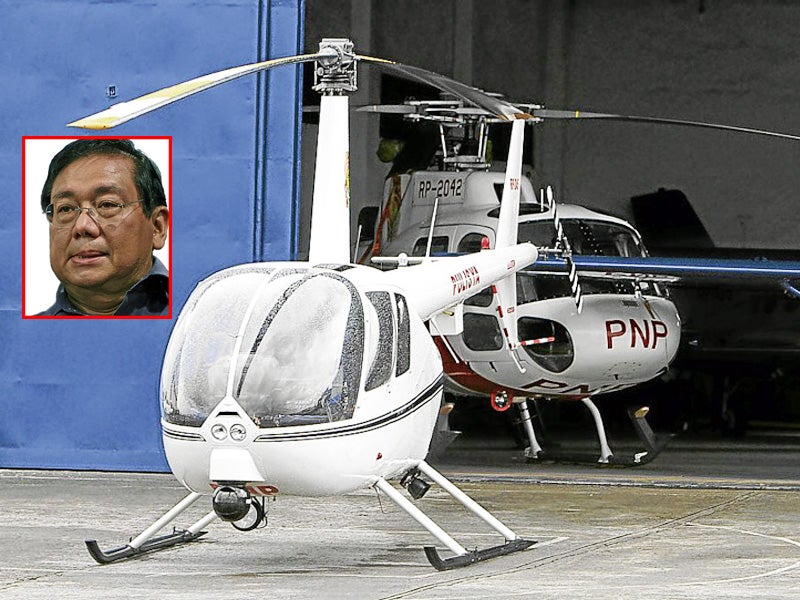 A Robinson R-44 Raven, one of two sold to the police as brand-new, is parked at the PNP hangar in the Manila International Airport Authority compound in Pasay City. Inset is the picture of former First Gentleman Jose Miguel Arroyo. INQUIRER FILE PHOTO

Lionair owner Archibald Po told the anti-graft court fifth division that he sold to Arroyo five Robinsons helicopters, two of which the former first gentleman allegedly sold to the police as brand new, in 2009.

Po added that he even called Arroyo to update him about the transaction, which was worth half a million dollars to expedite the delivery of the five helicopters.

Po said the helicopters arrived two months before the 2004 presidential elections, which wife and then incumbent President Gloria Macapagal-Arroyo won amid cheating allegations.

The former first gentleman was accused as being behind the P62 million sale of two choppers to the police through an accredited supplier, Manila Aerospace Products Trading Corp. (Maptra).

Arroyo denied owning the helicopters and denounced the statements of Po, who testified in a 2011 Senate inquiry that he delivered $700,000 in cash to Arroyo at the LTA Building in Makati City following the sale.

Po, however, has yet to bring up before the court the issue of the sale of the two choppers to police.

Arroyo was present in Wednesday’s hearing but refused an interview with reporters.