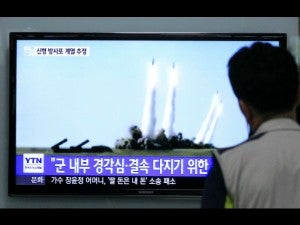 The launches, the third in a week, were believed to be sending a message that the North is boosting its defenses and expressing its displeasure that Xi will become the first Chinese leader to visit rival South Korea before the North, analysts say.

The projectiles, with a range of 180 kilometers (110 miles), were fired from the eastern coastal city of Wonsan and harmlessly landed in the sea Wednesday morning, South Korean defense officials said, speaking on condition of anonymity because of department rules.

The launches sent a message that North Korea does not want anyone meddling in its building up nuclear and other defense capabilities, said Chang Yong Seok, a senior researcher at Seoul National University’s Institute for Peace and Unification Studies. North Korea “must be feeling bad” about Xi’s trip to South Korea, he said.

Xi and South Korean President Park Geun-hye were scheduled to hold their fifth meeting since Park took office in 2012. Xi has not yet met Kim since the young North Korean leader took power in 2011 following the death of his father, Kim Jong Il.

China is North Korea’s longtime ally and the main aid provider, but Beijing was angered when Pyongyang ramped up tensions last year with its third nuclear tests and a torrent of threats of nuclear strikes against Seoul and Washington. China has supported tightening of U.N. sanctions and cracked down on North Korean banking activity.

Wednesday’s launch also came a day after South Korea rejected a set of proposals by North Korea that it said would reduce tensions, including the cancellation of annual drills between Seoul and Washington. Seoul officials said the North must first demonstrate that it is serious about nuclear disarmament if it truly wants peace.

North Korea’s powerful National Defense Commission called for the drills to be scrapped, calling them a rehearsal for invasion. It also suggested that the two Koreas halt hostile military acts against each other at border areas and stop psychological warfare. South Korea and the U.S. have repeatedly denied that they seek to invade the North.

The Korean Peninsula officially remains in a state of war because the 1950-53 Korean War ended with an armistice, not a peace treaty.