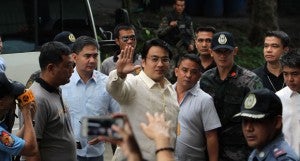 SANDIGANBAYAN/JUNE 26,2014
Senator Ramon ‘Bong’ Revilla Jr. waves as he arrives at the Sandiganbayan for his arraignment for plunder charges in connection with the pork barrel scam.
INQUIRER PHOTO/RAFFY LERMA

Citing Section 5 of Republic Act 7080 or the Plunder Law, the Office of the Special Prosecutor led by Deputy Special Prosecutor John Turalba said “any public officer against whom any criminal prosecution under a valid information under this act shall be suspended from office…”

“In view of the arraignment of the accused and that the validity of the Information in the instant case is no longer in question, and invoking the clear mandate of the law, suspension of both the accused pending litigation is now mandatory,” the government prosecutor further stated.

“Notwithstanding [their] present detention, the accused’s continued stay in office may frustrate the prosecution of the crime, if not prejudice the case filed against [them]…. To prevent the accused from committing further acts of malfeasance, tamper with documentary evidence and intimidate or influence witnesses in the case, it is necessary that the accused be suspended from office while the case is pending in court,” the motion further stated.

Both are charged with graft and plunder for their alleged involvement in the pork barrel scam. Revilla and Estrada are incumbent senators while Cambe has a rank of Director III at the Senate.

Both Revilla and Cambe who surrendered to authorities have been arraigned last June 26. Revilla refused to enter a plea while Cambe pleaded not guilty.

Estrada who also surrendered to authorities was arraigned Monday.

Revilla ‘sings’ all in Senate speech