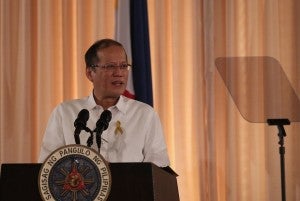 MANILA, Philippines – As President Benigno Aquino III marks his fourth year in office, Malacañang on Thursday maintained that despite the controversy the Disbursement Acceleration Program (DAP) had served its purpose.

“We strongly believe that the DAP has benefited the country,” Presidential Spokesperson Edwin Lacierda said.

“When we had a quarter where there was a very low GDP (gross domestic product), we implemented the DAP and it contributed to the various programs of the government, the various agencies,” he added.

The DAP, which was initially meant to pump-prime the economy through public spending, is being questioned before the Supreme Court for its legality. The Aquino administration was earlier accused of using the fund to allegedly influence senators during the impeachment of former chief justice Renato Corona.

“Now, it is questioned before the Supreme Court, so we will leave it to the Supreme Court as to its constitutionality. But is our professed belief that the DAP has benefited the country,” Lacierda simply said.

Read Next
Various groups call for price controls on rice
EDITORS' PICK
Gov’t plans to open COVID-19 vaccination for 5- to 11-yr-olds by January 2022
Omicron variant detected in more countries as scientists race to find answers
Smart, Cleanfuel ink tie-up program to deliver affordable connectivity solutions
Gov’t eyeing COVID-19 vaccine booster for essential workers, indigents by Dec. 10
Keep ransomware at bay with these security and backup strategies
A delightful blessing!
MOST READ
Quiboloy warns of ‘much worse than Omicron virus’ if his ‘persecution’ is not stopped
MMDA: Number coding during afternoon rush hours back this week
Roque joins ticket of Marcos-Duterte
Marcoleta defends pol ads on ABS-CBN
Don't miss out on the latest news and information.