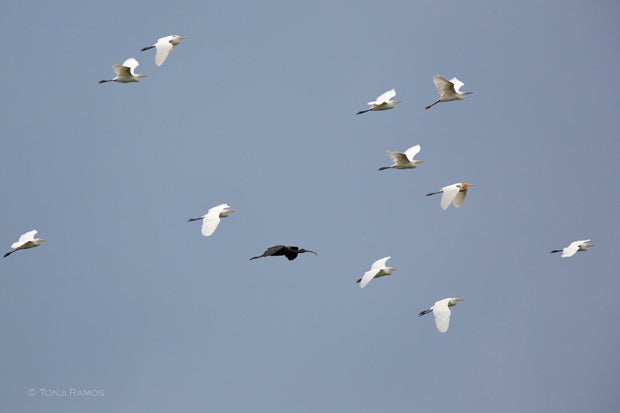 MANILA, Philippines–Glossy Ibis (Plegadis falcinellus), a bird rarely seen in the Philippines, was identified  last June 2 in Saud, Pagudpud, Ilocos Norte by volunteers from the Wild Bird Club of the Philippines (WBCP) taking part in a bird-migration research. This is the first time that this bird species was photographed in mainland Luzon.

Birdwatchers who followed last June 9 also reconfirmed the ibis sighting with photos; with added report of possibly a second juvenile or adult bird in non-breeding plumage. The few previous observations of Glossy Ibis in Luzon are limited to between September and November, making the June sighting in Ilocos Norte a puzzle. It has never been observed in the Visayas.

“This record may either be an example of post-breeding dispersal from mainland Asia or from Mindanao,” said ornithologist Arne Jensen, who heads the WBCP Records Committee. Glossy Ibis is migratory and dispersive, notoriously nomadic with distribution in South East Asia described as rare in Vietnam, Philippines and Indonesia.

Very little Philippines-specific information is available about this long-legged wading bird other than that it is believed to nest in freshwater wetlands in Mindanao and that it undergoes post-breeding dispersal.

Population decline in the country

“Due to conflicts with Muslim separatist movements, the suspected breeding areas in Mindanao  at Kabaksalan Island, Pulangi River, Maguindanao, around Lake Buluan, Maguindanao/Sultan Kudarat and in the Rio Grande Valley have not been visited in recent years and there were only two documented records from 2000 to 2013,” said Jensen. “Breeding was only recently confirmed in Baras Bird Sanctuary, Tacurong, Sultan Kudarat last June 7, 2014.” 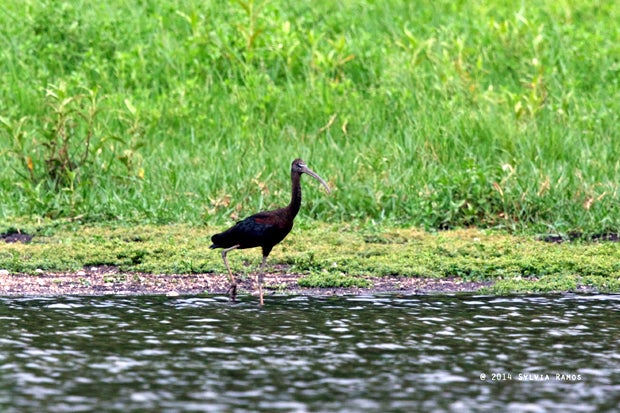 He added that there is one post-breeding Mindanao record in November 2012 at Dumoy, Davao City.

The adult ibis spotted in Pagudpud was in a shallow pond with emergent vegetation behind the coast. It was probing for food in the mud with its long decurved bill in the company of the endemic Philippine Duck Anas luzonica and Common Moorhen Gallinula chloropus.

The pond where the ibis was seen is within resort grounds and off-limits to hunters, effectively making it a sanctuary where birds can rest and feed safely.

“Although Glossy Ibis  may live up to 21 years, it is likely that the threats that include indiscriminate hunting; conversion of the species’ breeding habitats; and disturbances at its feeding, roosting and breeding areas may have caused the population decline in the Philippines,” said Jensen.

Glossy Ibis and other waterbird species are extremely important as indicators of ecological integrity.

“Wetlands can decrease flooding, remove pollutants from water, recharge groundwater, protect shorelines, provide habitat for wildlife, and serve important recreational functions,” said Jensen. “Birds that live in wetlands, or spend some time of their life in wetlands, are about 150 species or 22 percent of the Philippine avifauna. Most waterbird species have adapted to the drastically changing conditions of wetlands through their migratory behavior.”

According to Jensen, the Glossy Ibis and other resident wetland birds such as Woolly-necked Stork Ciconia episcopus and Oriental Darter Anhinga melanogaster have become extremely rare, and likely to face extirpation. He cited how the Spot-billed Pelican Pelecanus philippensis and the Sarus Crane Grus antigone were extirpated before World War II, and lately, in 1995, the last Masked Booby Sula dactylatra disappeared from its only known Philippine breeding site.

“Despite the massive decline in natural Philippine wetlands, there are still a large number of mainly smaller wetlands spread along the country’s coastline, and many of these have yet to be researched for their ornithological values,” said Jensen. “But what remains undisputable is their role in our ecosystems. Wetlands maintain biodiversity, reduce disaster risk, mitigate calamities and climate changes, and provide people with livelihood.”